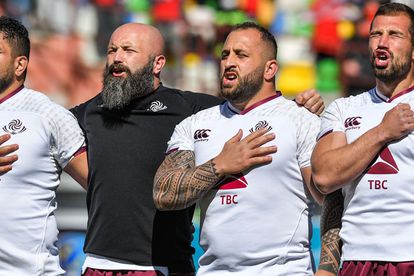 Georgia coach Levan Maisashvili has named his match-day squad for Friday’s Test against the Springboks in Pretoria. Photo: https://www.sarugby.co.za/

Georgia coach Levan Maisashvili has named his match-day squad for Friday’s Test against the Springboks in Pretoria. Photo: https://www.sarugby.co.za/

Georgia coach Levan Maisashvili has named his match-day squad for Friday’s Test against the Springboks in Pretoria, only the second time these two teams will meet in the international arena.

The match at Loftus Versfeld is scheduled to start at 19:00 and will be broadcast live on SuperSport with Scotland’s Mike Adamson the man in the middle.

Inside centre Merab Sharikadze will lead the Lelos against the Rugby World Cup champions, with Maisashvili handing a potential debut to one uncapped player, Luka Japaridze (prop), who was included on the bench.

Sharikadze is the most experienced member of the Georgian match-23, and has represented his country in 77 Tests so far. Three more players have more than 50 Test caps – hooker Jaba Bregvadze (66), lock Kote Mikautadze (67) and scrumhalf Vasil Lobzhaidze (58).

The Lelos are coming into the match on the back of a 48-15 victory over the Netherlands in Telavi last weekend, in a Rugby Europe Championship match, where they scored a total of eight tries, with Davit Niniashvili (fullback) scoring a hat-trick and Akaki Tabutsadze (right wing) adding a brace.

They are currently 12th in the world rankings, just below Fiji and higher than Tonga, Samoa and Italy.