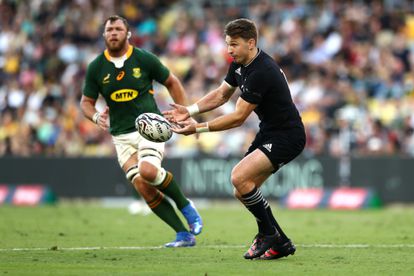 The All Blacks have “a lot of room for improvement” as they chase a rare Rugby Championship clean sweep against the Springboks this weekend. Photo: Twitter @AllBlacks

The All Blacks have “a lot of room for improvement” as they chase a rare Rugby Championship clean sweep against the Springboks this weekend. Photo: Twitter @AllBlacks

The All Blacks have “a lot of room for improvement” as they chase a rare Rugby Championship clean sweep against the Springboks this weekend, prop Joe Moody warned on Monday.

The New Zealanders snatched a late 19-17 victory over the Springboks on Saturday, but Moody said their error rate was unacceptable and must improve in the return fixture on Australia’s Gold Coast.

“We let a lot of things slip, it’s just about being better in our roles… it’s just basic, simple things,” the veteran front-rower said of the performance in Townsville.

“Hopefully going into this week we nail a few of those and have a better outcome. We didn’t execute as well as we should have and it was just a really average night at the office for us.”

However, Moody said the All Blacks were fired up at the prospect of completing the Rugby Championship with six wins from six Tests, saying it would be “the cherry on top”.

“It’s not done very often and this is a time for us to sort of make history I guess,” he said.

Fellow prop Nepo Laulala said the sense of occasion playing in the 100th meeting between the All Blacks and Springboks last weekend had affected the New Zealanders in Townsville, Australia.

But he said the All Blacks, who also won all of their matches at the annual four-team tournament in 2017, had refocused and were intent on producing a more clinical performance in the final fixture.

“It’s exciting but we’re just being a bit more wary of not playing the game too early in our heads,” he said.

“We also talked about training the (same) way we want to play because maybe there was a bit of complacency in training.”

Laulala admitted he was sore after the match, saying playing the Springboks was “like running into brick walls”, which made New Zealand’s victories over their arch-rivals – and world champions – more special.

“When you come up against a pack that just want to kill you and go through you, it’s a different feeling after the game,” he said.

“It’s just so rewarding to get the win.”