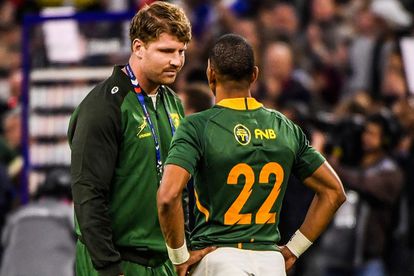 The Springboks will look to bounce back from their losses against Ireland and France when they take on Italy in the third of their end of year Tests on Saturday, 19 November. Kick-off in Genoa will be at 15:00 (SA time).

Nienaber has again opted for a six-two forwards-to-backs split on the bench, which includes Stormers duo Evan Roos and Manie Libbok.

Roos earned his one and only Bok cap to date during the July Test series against Wales, while Libbok made his debut this past weekend against France.

As both get set for a big opportunity against Italy, they have shared the excitement that they are feeling.

“I’m still excited and I’m struggling to sleep at night,” Roos said. “It’s been a while since I could represent the country, so it’s always such an honour to do so. It’s awesome to be part of the Bomb Squad and mine is to bring energy, presence, and play like I normally do.

“I’m not going to try something different or new and hopefully, that’ll be enough.”

Meanwhile, Libbok has spoken of how he was nearly tempted to sleep in his Springboks jersey ahead of his Test debut against France last week.

“I almost slept in my jersey, but on the Friday before the game, I made a point of taking time out to just have a good look at my jersey and just realising the magnitude of what it means,” Libbok said.

“It’s one of the biggest moments of my life so far. I’m grateful and honoured that I was able to go onto the field.”

The Springboks finished up their last big training session on Wednesday and will have Thursday off to rest before wrapping up their preparations on Friday with their captain’s run.