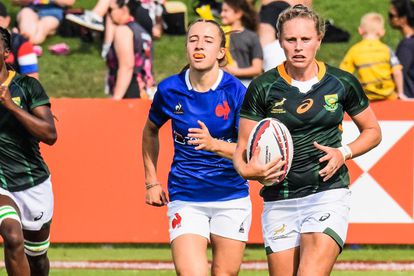 The Springbok Women’s Sevens stayed in the race for the title of the Dubai Sevens tournament by beating Kenya 31-0 in the pool stages on Thursday after a slow start to the day.

In their opening game, France A defeated the South Africans by 21-17 in a match where – in the words of co-captain, Mathrin Simmers – “silly errors” cost the team.

ALSO READ: Dubai Sevens — What are the Blitzboks’ kick off times?

They managed to eliminate those mistakes from their play, which had a direct impact on the big win over Kenya, according to Simmers.

“We started well against France and had a 10-7 lead at the break and extended that to 17-7, but then we lost a bit of focus and patience, especially on defence,” said Simmers.

“That allowed them to score two tries and to pip us at the post. There were good things in that game, but the mistakes we made cancelled that out.”

In the game against Kenya, who represented Africa at the Olympic Games last year, the very low error rate tipped the scales towards South Africa in a commanding way.

“We kept building on the good things we did against France, but were much more clinical against Kenya,” added Simmers.

“We managed to stay focussed till the end and never allowed them into the game. Our defence was strong, we used our pace well and did not stop putting them under pressure with our size and physicality.

“The result was sweet, as that was more to the standards we have set ourselves and want to play at this tournament.”

“We have played against them a couple of times in the past, so we know that we need to be at our best again if we want to beat them and progress to the quarter-finals,” said Simmers.

“We did get good confidence out of the last match and we are finding each other now. We just need to continue with the mindset we had. We have seen that we can get results when we are patient and execute the game plan.”

The final pool match in Dubai is on Friday against Tunisia at 13h00 (SA time).

ALSO READ: Dubai Sevens — Blitzboks aim for a perfect 10 in the desert

The Dubai leg of the World Rugby Sevens Series kicks off on Friday, with the Blitzboks playing Great Britain, Kenya and Australia in Pool A.

Statistical summary ahead of Dubai Sevens:

Are these the 30 greatest Springboks of the past 40 years?