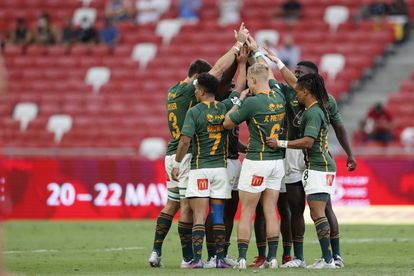 The Blitzboks will begin their title challenge against Spain at 20:15 (SA time) on Saturday, 16 April. Image : Twitter/Blitzboks

The Blitzboks will begin their title challenge against Spain at 20:15 (SA time) on Saturday, 16 April. Image : Twitter/Blitzboks

The Blitzboks saw their record-breaking winning streak come crashing down last week, but they have no time to mourn as they are straight back into it in Vancouver.

The Springbok Sevens will start the Canada Sevens as the most successful team at BC Place in Vancouver, having played the most Cup finals of any of the 16 teams at the sixth tournament of this year’s World Rugby Sevens Series.

They finished second in 2016 and 2017 before winning their maiden Cup title at this event in 2019, before claiming gold for the second time in 2021, and come into the tournament as defending champions and, for good measure, at the top of the World Series standings.

However, these statistics were not on their minds as they arrived in Canada on Monday. It was the three successive defeats and the rash of penalties conceded in those matches that worried Blitzbok coach Neil Powell.

And for good reason, as Powell explained.

“The number of penalties was a worry – we are more disciplined than that and have been for a while,” he said.

The high number of penalties conceded prompted a chat to the match officials to get clarity and left Powell with a clearer picture for the Canada event.

“We did chat to the officials to understand where we made those errors in order to rectify them,” said Powell.

“It was a combination of frustration on our side and interpretation on theirs. We sought clarity and got that.

“The feedback to the players was that we need to give the referees a better picture of what we do. We know the rules it was just a reminder of what was wrong and what not. There should be no issues this weekend,” he added.

The Blitzboks’ three Pool C opponents are also familiar foes. They played against Canada twice in recent tournaments and could expect the hosts to be fired up on home soil, while they also encountered Spain in BC Place last time they were there, outplaying the Western Europeans in their pool encounter and then again in the Cup quarter-final last year.

South Africa’s last encounter with Australia was also in Malaga, Spain in January, two tournaments ago.