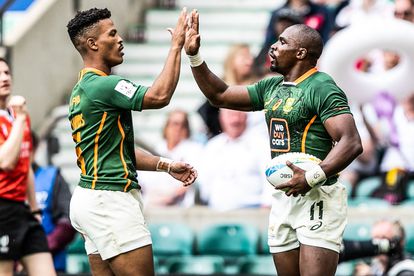 The Commonwealth Games Sevens competition features most of the biggest players in the sport including our Blitzboks.

WIN | TICKETS TO WATCH THE SPRINGBOKS FACE THE ALL BLACKS!

South Africa started well with a 46-0 win over Malaysia but will expect things to a bit tougher as the tournament goes on.

The South Africans scored eight tries in total after they had eased into a 22-0 lead at the halfway mark. Angelo Davids scored twice in the first half, while a strong-running Muller du Plessis and Selvyn Davids also got onto the score sheet before the break.

Blitzboks head coach Neil Powell made a raft of changes in the second half, with regular skipper Siviwe Soyizwapi also coming on after the break to open the second-half scoring against the plucky Malaysians.

Dewald Human, another replacement, also joined into the scoring act in the second stanza while Angelo Davids scored his third try before Zain Davids, who started the match wearing the captain’s armband, rounded off the scoring for a solid start to the tournament.

The second match is a tricky encounter against the dangerous pacific islanders from Tonga.

Royal Family opens book of condolence for tributes to Queen Elizabeth II: Here’s how to sign