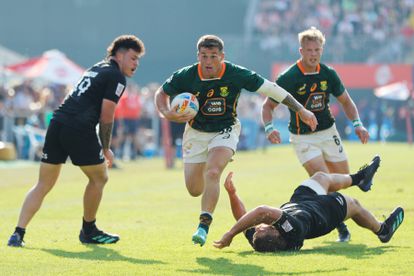 Watch these two uncanny videos in which Blitzboks newbie Ricardo Duarttee boldly predicted that his team “will lift the Cup” at the Dubai Sevens.

Duarttee was one of two debutants, along with Masande Mtshali, named in the Blitzboks squad for the Duvaie Sevens and he quickly become a fan favourite for his contributions to the team’s campaign throughout the weekend.

The Blitzboks had come into the tournament in search of a record fourth straight Cup title win in Dubai and a record-breaking 10 overall at this specific event.

Drawn in Pool A with Great Britain, Kenya and current World Rugby Sevens Series champions Australia, the Blitzboks were up against it from the outset. They lost their opening game against Great Britain, but bounced back with two hard-earned wins over the Kenyans and Australians, to book a place in the Dubai Cup quarter-finals.

Speaking after the result against Australia on Friday night, an animated Duarttee confidently prophesied the Blitzboks’ win before the playoffs even started.

“I can’t wait for tomorrow, we’ll lift this Cup,” he said at the time.

The Blitzboks met Samoa is the quarter-final on Saturday morning and went on to clinch a 24-19 over the Pacific Islanders to set up a semi-final showdown against rivals New Zealand.

In the immediate aftermath of the victory over the Samoans, Duarttee, who coined the nickname Tricky Ricky, was at it again, as he courageously declared that

“I believe we will lift this Cup,” he boldly told World Rugby in a post match interview.

As it turned out, Tricky Ricky was right. The Blitzboks would do on to lift the Dubai Cup after a great 26-19 comeback win over New Zealand in the semi-final and a crushing 21-5 victory against Ireland in the final.

The result pushed the Blitzboks to the top of the World Rugby Sevens Series log.