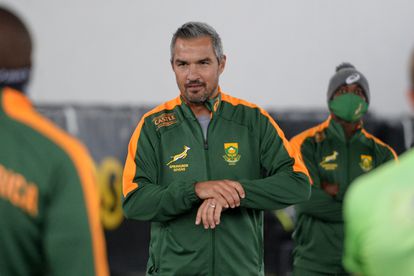 The World Rugby Sevens Series leading Blitzboks arrived in Singapore early to ensure they had the best possible preparation for the next stop on the circuit.

Coach Neill Powell wants a fast start from the Blitzboks and was pleased with the decision to arrive early to acclimatise and get their quarantine out of the way.

The Blitzboks face Canada in their Singapore Sevens opener on Saturday.

Blitzboks try to get the jump on Singapore Sevens

“We executed that plan from our medical team with success,” said Powell.

The coach also added: “We arrived early which helped, and we managed a defence and attack session, and both went well. We deliberately wanted to create high intensity early in the week and managed that. It was not perfect, but overall, I am happy with the effort the guys shown in those early sessions.”

The return of Fiji, New Zealand and Samoa is not playing on the Blitzboks’ minds with their first goal being getting out of their tricky group.

“It is not an easy pool. If you are not prepared well, you can easily trip over any of these three sides,” said Powell.

He also said: “The last time we played Canada (in Malaga in January), the score was still 0-0 at the break and I am sure they will take a lot of confidence out of that performance. Our focus will be on that game and as always, we would like to set a standard for ourselves for the remainder of the tournament. So, we do target a good start.”

Powell is particularly wary of the United States and their strike runners Kevon Williams and Perry Baker. The Eagles have been a bogey team for the Blitzboks in the past.

“They have some players that are getting used to the World Series. With pace like that you need to be very protective of your ball possession, because those guys can score from anywhere on the field,” he said.

“If we do the things well that we need to, the results will speak for itself. So the responsibility is ours to maintain the standards that made us successful so far this series,” Powell said.