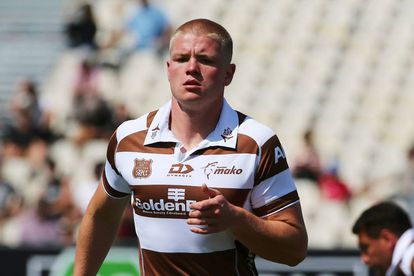 After moving halfway around the world to New Zealand from Frankfurt, rugby-mad German Anton Segner is on the path to the All Blacks. Photo: Getty Images

After moving halfway around the world to New Zealand from Frankfurt, rugby-mad German Anton Segner is on the path to the All Blacks. Photo: Getty Images

After moving halfway around the world to New Zealand from Frankfurt, rugby-mad German Anton Segner is on the path to the All Blacks having already worn the coveted black jersey for the national Under-20 team.

The All Blacks, second in the world rankings, kicked off their end-of-year tour at the weekend by hammering the USA in Washington before heading to Europe where they play Wales on Saturday.

Back in New Zealand, Segner is lapping up everything he is learning playing provincial rugby.

READ | LOST TO SA: LIONS PROP PACKS HIS BAGS AND HEADS TO SCOTLAND

His ultimate goal is to play for the All Blacks, for whom he would be eligible in 2022 after five years living in New Zealand.

Football is king in soccer-mad Germany, where rugby is a minority sport and the men’s team ranked 30th in the world.

Yet 20-year-old Segner has only had eyes for the oval ball since his first sessions at local club SC Frankfurt 1880, where he was often coached by New Zealanders.

Drawn by the sport’s physicality and camaraderie, he yearned to play in New Zealand, fuelled by his coaches’ tales of rugby down under.

“Rugby in New Zealand is like football in Germany – every kid seems to go around with a ball under their arm,” Segner told AFP from New Zealand.

Segner jetted off in 2017 to study on New Zealand’s South Island at the prestigious Nelson College, a school with a strong rugby tradition which has produced several All Blacks including current Test centre David Havili.

After starting the interview in German, Segner switches to near-perfect English with a heavy Kiwi accent, which is more Whangarei than Frankfurt.

“That’s from hanging around my team-mates so much,” he laughs.

His rise through the junior ranks of New Zealand rugby has been nothing short of meteoric.

His skills as a back-row forward saw him captain the Nelson College first XV and earn selection for the New Zealand Schools team in 2018.

“It was incredible, a huge honour,” he said of his debut against Tonga.

Performing the ‘Haka’ – the ceremonial pre-match Maori challenge – was not a problem.

“You have to really go for it, or you look like an idiot,” he adds with a grin.

His performances in schoolboy rugby led to a professional contract with the Nelson-based Tasman Mako, who play in New Zealand’s National Provincial Championship (NPC).

“I have been fortunate enough to learn from people who have made it to the top level,” said Segner, whose Mako team-mates Havili, Ethan Blackadder and Finlay Christie are touring with the All Blacks.

“I still have a huge amount to learn and I love it.”

To cope with the physical demands, he has bulked up, weighing 110kg compared to 95kg when he first arrived.

Segner gained big-match experience last November when he came off the bench in Tasman’s nail-biting 13-12 win at Auckland to win the NPC Premiership final on Eden Park’s hallowed turf.

He describes the experience as “probably the hardest game” since moving to New Zealand, but Tasman head coach Andrew Goodman said the young German came through with flying colours.

“He came on and made a couple of good plays which for someone so young was pretty cool,” Goodman told AFP.

“He’s really thrown himself into his rugby – he’s one of the last to leave training and always asks a lot of questions.”

In July, Segner played for New Zealand Under-20s in a 73-0 demolition of the Cook Islands’ senior team in Auckland.

As captain of the Under-20 team at Super Rugby franchise the Crusaders, he has trained alongside the likes of All Blacks forwards Sam Whitelock, Scott Barrett and Codie Taylor.

“I was star struck,” admitted Segner, who resisted the temptation to put in a big tackle on any of his idols.

“If I injured any of them, I’d probably have been deported back to Germany,” he joked.

His immediate goal is to earn “solid game time” for Tasman to boost his chances of a full-time Super Rugby contract.

Covid-19 travel restrictions means it has been two years since he returned home, where his progress is closely followed.

“It’s an amazing story – a young player from Germany who is better than most New Zealanders (his age),” Tilo Barz, head of youth rugby at Segner’s former club in Frankfurt, told AFP.

“People often ask why he isn’t playing for Germany, but it’s because he’s simply too good – he’s playing at another level.”

But could a German really one day play for the All Blacks?

“I don’t see why not, he has the personality and desire to learn – everything is possible for him,” adds Tasman head coach Goodman.