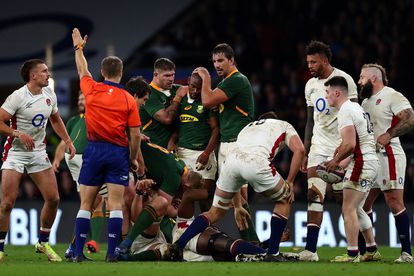 England claimed a hard-fought 27-26 win over the Boks at Twickenham on Saturday to dash the South Africans’ hopes of ending the Outgoing Tour of the United Kingdom unbeaten.

As is so often the case after defeat, some question marks have been raised over the officiating and calls made by referee Andrew Brace, which is something former Bok assistant coach Swys de Bruin particularly honed in on during a SuperSport studio discussion.

You can check out the full video below:

After Saturday’s clash, the Boks clearly looked to avoid getting into any conversations criticising the officials, with coach Jacques Nienaber taking a diplomatic route.

“It’s something we will have to look at and we always do in terms of getting alignment with the referees and the pictures they see and that we see,” said Nienaber.

“The key thing is doing that alignment is to basically get a better product for the spectator. The more we are aligned with our refs, the less we will make errors and there will be less penalties and more ball in play time.

“That’s something we always do, because we would like to get a better product out there.

“I’ve got no issues with the refereeing and the team of four [match officials],” the Bok coach concluded.

READ: Springbok v England player ratings: Who stood out – and who FLOPPED

The build up the final Test of the year was also ultimately overshadowed by the double suspension handed down to Rassie Erasmus, who was not able to serve in any role at Twickenham due to his matchday ban that ultimately stemmed from his previous criticism of referees.

However, Nienaber refused to offer any excuses for the Bok defeat after the game.

“We stayed away from that,” he said in reference to Erasmus’ absence and suspension.

“We had to focus on England and we knew it was going to be a big challenge for us, so our whole focus was on that.

“I can’t say that it had any influence.”