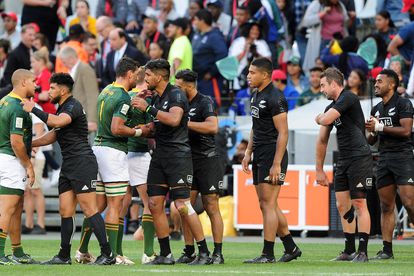 The All Black Sevens team will be in action for the first time since March 2020 when they take part in the Singapore Sevens next weekend. Photo: Ryan Wilkisky/BackpagePix

The All Black Sevens team will be in action for the first time since March 2020 when they take part in the Singapore Sevens next weekend. Photo: Ryan Wilkisky/BackpagePix

SA Rugby announced on Monday that tickets had virtually flown off Ticketmaster’s “cyber shelves”, with a total of 23,817 purchased by FNB clients as part of their “early bird” partnership with the tournament, while another 36,183 were grabbed in the first six hours after public sales opened at 09:00; of these, 23,247 were snapped up in the first hour for the highly-anticipated sevens event!

“We’re very grateful for this amazing support and it underlines the hunger of South Africans – as well as rugby supporters from around the world – to attend live events after two very tough years,” said Jurie Roux, CEO of SA Rugby.

“As we’ve seen with the HSBC Cape Town Sevens since 2015, the Mother City knows how to put on a proper sporting party and we’re expecting more of the same in September.

“We’ve brought in new three-day packages, which have sold like hot cakes, and we’d like to urge people who have not yet bought their tickets, to get in on the action as soon as possible as it looks like we’re headed to another sold-out event.”

Supporters wishing to attend this event – the first Rugby World Cup in South Africa in 27 years, featuring the 40 best men’s and women’s sevens teams on the planet – can still get their hands on tickets through the official ticket agency (Ticketmaster) by visiting www.rwcsevens.com.

The Sevens event will take place in September

Organisers again urged supporters to only buy from Ticketmaster and no other ticketing outlets, suppliers or re-sellers, to avoid being ripped off at massively inflated prices. These tickets cannot be guaranteed.

The Rugby World Cup Sevens 2022 tournament will take place in Cape Town from 9 to 11 September.

REVEALED: HOW THE SHARKS WERE ABLE TO ‘AFFORD’ ETZEBETH