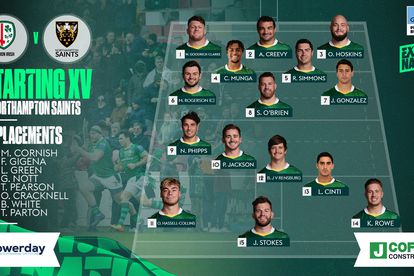 London Irish Director of Rugby Declan Kidney has confirmed the Exiles squad that will welcome Northampton Saints to the Brentford Community Stadium for Round 21 of the Gallagher Premiership on Saturday, 26 March.

Will Goodrick-Clarke starts to make his 50th appearance and is joined in the front row by Agustin Creevy and Ollie Hoskins. Chunya Munga and Rob Simmons are named in the second row.

Matt Rogerson captains the team from the six jersey and is joined in the back row by Juan Martin Gonzalez and Seán O’Brien.

Nick Phipps and Paddy Jackson are the London Irish halfback duo, with Benhard van Rensburg and Lucio Cinti in the centres.

Ollie Hassell-Collins, Kyle Rowe and James Stokes start in the back three.

“Tomorrow’s match is a big occasion for the players, supporters and staff alike,” said Kidney.

“The St Patrick’s Party is etched into the club’s DNA, and we are aware of how much it means to everyone involved.

“Northampton are a side that play an exciting brand of rugby, which will add to the excitement of the day. It has the makings for a great day and a good game of rugby.”

London Irish are currently sixth in the 13-team Gallagher Premiership standings with 53 points after 19 matches.

Northampton Saints find themselves in eighth place with 48 points, but have only played 18 games.