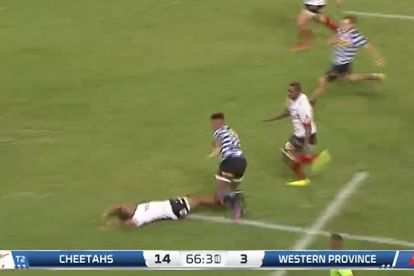 A screen shot of the massive collision in Wednesday’s Currie Cup rugby match.

A screen shot of the massive collision in Wednesday’s Currie Cup rugby match.

A HUGE collision between Western Province’s Angelo Davids and the Cheetahs’ Rosko Specman both awed and concerned Currie Cup viewers on Wednesday, 16 March.

Davids finished off a brilliant end-to-end team try for the Cape side against the Cheetahs in their clash in Bloemfontein, but his massive collision with Specman sent his opposite number flying to the ground.

The bump-off clearly caused whiplash for Rosko Specman, who wearily got to his feet and attempted to make a tackle afterwards.

Eventually, WP went on to score a scintillating try after an extended period of play.

However, many viewers were left shocked that referee Morne Ferreira did not stop play after Specman clearly appeared to suffer a concussion.

Thankfully, Specman took to social media on Thursday to confirm he was “okay”.

“12 years of rugby and suffered my 1st concussion last night. Thank you to everyone for their msgs. The boy is okay. I’ll be taking it slow for a bit. @angelo_davids12 definitely had my number last night, but that’s the nature of the game… it’s all love!” he wrote.

Recently, the severity of concussion and head injuries was back into the spotlight after Stormers lock David Meihuizen was forced into premature retirement.

READ | FRANCE CAN OVERTAKE ALL BLACKS IN WORLD RANKINGS: HERE’S HOW

The towering lock has decided to walk away from the game at the age of 24, on advice from the Stormers medical team after consulting numerous specialists.

He ends his career with 23 Western Province caps and eight caps for the Stormers, the last of which came in the United Rugby Championship encounter with Connacht in Galway.