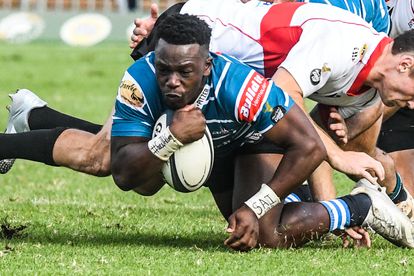 Griquas player Sango Xamlashe is tackled during the Currie Cup match against the Lions at Ellis Park. Photo: Currie Cup

Griquas player Sango Xamlashe is tackled during the Currie Cup match against the Lions at Ellis Park. Photo: Currie Cup

The Cheetahs moved to within a point of Currie Cup log leaders the Bulls as they were made to work hard for victory over Western Province on Friday.

Meanwhile, Griquas maintained their push for a playoff spot thanks to a last gasp win over the Lions on Thursday.

The final match scheduled for the weekend, between the Sharks and the Bulls in Durban, was cancelled, with the result declared a draw and both teams receiving two log points apiece.

In Cape Town on Friday, the visiting Cheetahs clinched an important 28-21 away win thanks to a lively second-half performance, and they are still unbeaten with 31 points on the log from seven matches.

The Bulls, who have played one match more, are on 32 points, while the Sharks remain third on 24 points. Griquas, who beat the Lions by 23-17 in Johannesburg on Thursday, are now only four points behind the coastal side.

The Pumas had a bye this weekend and remain fifth on 15 points. They are followed by the WP (nine points), and the Lions (three points).

The next round of matches is scheduled for 6 and 7 May, when the Sigma Lions host the Toyota Cheetahs in Johannesburg, the Airlink Pumas travel to Durban to take on the Cell C Sharks, and the Vodacom Bulls face Windhoek Draught Griquas in Pretoria.

DHL Western Province couldn’t find an extra gear as the Toyota Cheetahs turned things around in the second half of their Carling Currie Cup clash in Cape Town to gain an important 28-21 victory at the DHL Stadium on Friday evening.

The hosts led 16-7 at the halfway stage through one converted try and three penalty goals, while the Free Staters replied with a converted try. In the end, the visitors clinched the game through three well-constructed, converted tries in the second half.

The fixture at the DHL Stadium was one of contrasting fortunes for the two sides. The first half belonged to the fired-up home side, while the visitors played much better in the second half to maintain their unbeaten status in the competition.

It was also a memorable occasion for prop Aranos Coetzee, who played in his 100th match for the Toyota Cheetahs. The 34-year-old front ranker has also played in 24 Tests for Namibia.

The Lions were a few minutes away from a first Currie Cup win this season before Griquas replacement back Ashlon Davids broke the hosts’ hearts with a late try that secured his side a hard-fought 23-17 victory in Johannesburg on Thursday afternoon.

Before Davids had clinched the match for the Kimberley visitors at Wits University, the home team held a slender 17-16 lead after they had managed to wipe out a halftime deficit of 3-13 thanks to a spirited second-half performance.

But unfortunately the Sigma Lions, now winless after eight games, had an indifferent first half during which they conceded far too many penalties.