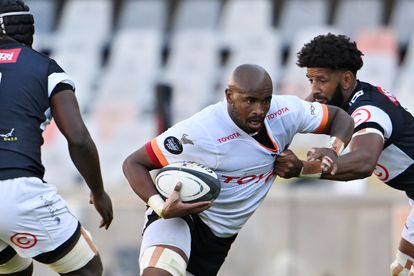 The Cheetahs ran the Sharks ragged to register a bonus-point win in Bloemfontein and continue their flawless run in this year’s Currie Cup. Photo: Johan Pretorius/Gallo Images

The Cheetahs ran the Sharks ragged to register a bonus-point win in Bloemfontein and continue their flawless run in this year’s Currie Cup. Photo: Johan Pretorius/Gallo Images

Rosko Specman returned with a vengeance as the Cheetahs ran the Sharks ragged to register a 44-15 bonus-point win in Bloemfontein on Saturday and continue their flawless run in this year’s Currie Cup.

The recently-wed wizard left the men from the coast clutching at air with his electrifying speed and footwork and sparked two of the home team’s four first-half tries, which set up a comprehensive victory that moved the Free Staters to the top of the table for the time being and earn a home semi-final.

Ruan Pienaar and company clicked from the word go, scoring six tries in all, while they also dominated at scrum time. As impressive as their fluidity on attack was the collective work rate of their pack, which saw them beat the Sharks to the punch.

The Durbanites were competitive for the first 30 minutes and refused to roll over but allowed the Cheetahs too much time and space on the ball as they fell to a second successive loss to remain in third place.

Brilliant phase and interplay between the forwards and backs saw the Cheetahs work their way into the 22 and ultimately get off to the perfect start as Champion of the Match Victor Sekekete went over after just three minutes following a line break by Siya Masuku, with captain Pienaar adding the conversion.

Boeta Chamberlain opened the Sharks’ account with a long-range penalty goal in the seventh minute but they found themselves behind their posts after some “Specmagic” that saw the winger waltzing past several defenders and offloading to Marnus van der Merwe, whose support play and power resulted in a five-pointer.

The Sharks replied with a sweeping attack finished off by Cameron Wright, with Chamberlain’s successful conversion making it 12-10 after 16 minutes.

The Cheetahs’ scrummaging prowess then came to the fore as they won two penalties in quick succession to return to the red zone, but their handling let them down.

They remained in prime real estate, though, where a turnover by Pienaar and good hands led to their third try through Cohen Jasper. Pienaar’s conversion attempt was wide, as was Chamberlain’s shot at goal shortly after the half-hour mark.

Showing what a quality side they are, the Free Staters scored their bonus-point try on the stroke of half-time. Good set-piece work – first excellent contesting in the lineout from Aidon Davis and then another dominant scrum – saw them pile on the pressure and while the Sharks defended courageously, the dam wall eventually broke as a sleight of hand by Specman put Andisa Ntsila over.

Pienaar this time nailed the conversion to give the Cheetahs a 24-10 lead, just the reward they would’ve wanted for their superiority and 63% possession they enjoyed in the first 40 minutes.

The Durbanites were desperate to score first after the break but the home team’s defence held firm. They’d go on to deliver a hammer blow as Daniel Kasende raced clear before quick recycling saw the impressive Mihlali Mosi canter in.

A yellow card to replacement prop Cameron Dawson for taking Hyron Andrews out in the lineout in the 51st minute gave the Sharks a lifeline, which they capitalised on immediately, replacement hooker Dan Jooste mauled over for an unconverted try to make it 31-15.

The 14-man Cheetahs, however, handled the rest of the 10-minute period well, shutting out the Sharks with Pienaar popping over a penalty goal.

His halfback partner Siya Masuku, who was excellent on attack, took over the kicking duties and added three more points to the tally and converted Louis van der Westhuizen’s try as the hosts capped an impressive display.