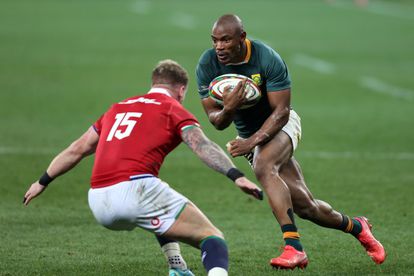 CAPE TOWN, SOUTH AFRICA – JULY 31: Makazole Mapimpi of South Africa on his way to the tryline during the 2nd Test between South Africa and the British & Irish Lions at Cape Town stadium on July 31, 2021 in Cape Town, South Africa. (Photo by EJ Langner/Gallo Images/Getty Images)

CAPE TOWN, SOUTH AFRICA – JULY 31: Makazole Mapimpi of South Africa on his way to the tryline during the 2nd Test between South Africa and the British & Irish Lions at Cape Town stadium on July 31, 2021 in Cape Town, South Africa. (Photo by EJ Langner/Gallo Images/Getty Images)

Springboks vs British and Irish Lions: The series comes down to a decider in the Cape Town Stadium on Saturday 7 August.

The Springboks overpowered the British and Irish Lions 27-9 in the second Test to level the series after the tourists won the first Test 17-22.

Injuries have forced the Springboks into some changes with Franco Mostert moving from lock to the side of the scrum, while Lood de Jager is promoted from the bench to start alongside Eben Etzebeth in the second row. That shuffle has been brought on by an injury to flanker Pieter-Steph du Toit, who hurt his shoulder taking a dangerous, late, tip-tackle from Duhan van der Merwe.

Van der Merwe retains his place in the Lions team despite enduring a poor game in the second Test, which included a horrendous foot-trip on Cheslin Kolbe, but there is a change on the other wing for the Lions with Josh Adams starting on the right wing.

The other Springbok change is at scrumhalf, where Cobus Reinach replaces Faf De Klerk, who has been ruled out due to a muscle strain in his leg.

For the third Test in a row a Springbok will mark their 50th Test cap, with Damian de Allende bringing up his half century in the green and gold.

The Springboks have put out a beefy pack that is likely to dictate not only the way they play but the way the opposition approach the game.

After the kicking game went awry for him in the second half, Dan Biggar will be under pressure to make better decisions when he gets on the ball in the Springbok half.

British and Irish Lions coach Warren Gatland has turned to an all-Irish and all-Connacht centre pairing in Bundee Aki and Robbie Henshaw. Aki’s matchup with De Allende is one of the most anticipated of the match.

The Springboks decision to use Mostert at flank, points to a need to neutralize the Lions’ lineout strength as much as retaining the physical edge.

“This group of players are among a handful of players in the history of South African rugby that have an opportunity to clinch a series against the Lions after winning the Rugby World Cup, and every player in this squad understands what a rare honour that is,” said Springbok coach Jacques Nienaber.

“I don’t think one needs any more motivation than that to win this weekend. We are preparing for a physical encounter and we know that every small battle will count if we want to win the series.

“This match is as important to us as it is for the Lions, so we know it is going to be tight, and we will have to capitalise on every opportunity we have to score points, and be effective in every area of our game.

Springboks vs British and Irish Lions

After making six changes to the starting XV which lost last time out, Gatland insisted the tourists would look to take the attack to the Springboks.

“You’re just trying to get that balance right. I think if you go back we did the same thing four years ago, we made six changes, and I think that’s a credit to the players,” he said.

“There have been so many tight calls, so many where you’re there and having a long discussion about selection and trying to get the right combination and thinking about players to start.

“There have definitely been some tough, tight calls on this Tour. We definitely want to play some more rugby and we just didn’t get that opportunity in the second half.

“First half we got some of the bounces we got in the first Test in terms of aerial stuff, basically we got nothing from the air in the second half and South Africa kicked the ball 22 times in that half.

“We only kicked ten times, we were trying to go out there and get some momentum and play some rugby and we just never got into the game in that last 20 minutes or so.

“That’s why there are some changes and Finn Russell comes on the bench because he offers us something a little bit different to the other two tens who are very good at what they do.”

Springboks vs British and Irish Lions