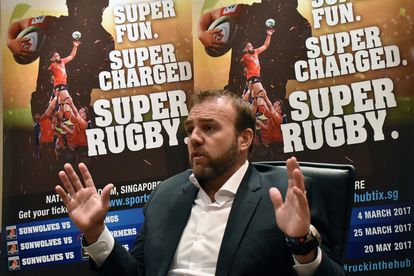 Rugby Australia is considering loosening its rules barring most overseas-based players from representing the Wallabies after their latest thrashing by New Zealand. Photo by Matthew MOHAN / AFP

Rugby Australia is considering loosening its rules barring most overseas-based players from representing the Wallabies after their latest thrashing by New Zealand. Photo by Matthew MOHAN / AFP

Rugby Australia (RA) chief executive Andy Marinos said he was surprised by news that the 2021 British & Irish Lions’ tour to South Africa will go ahead as planned and was cool on the idea of the Wallabies also travelling there to play Tests.

The British & Irish Lions and SA Rugby confirmed on Tuesday that the July-August tour will go ahead in South Africa.

The decision effectively ruled out contingency plans for the United Kingdom or Australia to host the quadrennial series.

“This announcement this morning that they’re going to host the Lions tour took me by surprise a little bit,” former Wales centre Marinos told reporters in Sydney on Wednesday according to Reuters.

“I don’t know what the structure around that is looking like.”

Africa’s most industrialised nation has yet to start vaccinating the general public, and the British & Irish Lions’ winter tour will almost certainly be staged without fans in stadiums.

RA had offered to hold the tour in Australia, where Covid-19 has been virtually eliminated and decent crowds have been packing sport events for months.

Australia and its southern hemisphere partners South Africa, New Zealand and Argentina have yet to decide when and where to hold the annual four-nation Rugby Championship, which is slated for the second half of the year after the Lions tour.

South Africa withdrew from last year’s Rugby Championship after governing body SANZAAR elected to stage the whole tournament in Australia due to the pandemic.

The rebranded “Tri-Nations” tournament went off without a hitch but it was much diminished in the absence of the world champion Springboks.

Marinos said Australia hoped to host the whole Rugby Championship with the Springboks included, and was less enthused by the idea of the Wallabies travelling to South Africa.

“We need to have those sort of robust conversations with South Africa, what does it mean?” said Zimbabwe-born Marinos.

“There’s more of a concern with our guys having to go over and potentially quarantine there than coming back and quarantining over here, which I know the South Africans are going to have to do if they come here,” he said.

“I think we’ve resigned ourselves to the fact that we’re probably going to be in a bubble in some way, shape or form.

“So we’re going to go through a process of determining where that needs to be.

“My request to SANZAAR is let’s get ahead of the game and build a proper model.”

Marinos confirmed that RA were “absolutely planning” to host France for Tests in July and said the French had a “huge desire” to tour.

Governing body World Rugby are expected to confirm the dates for the July Test window in the coming days.