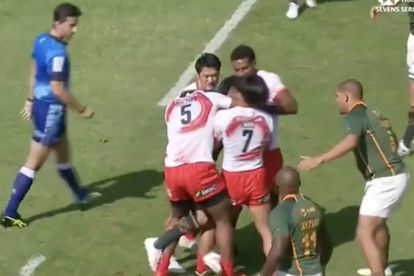 The strange moment in question.

The strange moment in question.

Playing against Japan in the World Rugby Sevens tournament on Friday, Blitzboks star Angelo Davids gets held up by a group of Japanese players as he went into contact.

However, with Davids’ Springbok Sevens teammates opting to not engage in the contact situation, the referee calls “it’s not a maul”.

In fifteens, if a player is held up in such a manner, the referee will very quickly blow his whistle and award a scrum to the defending team.

However, a different interpretation in sevens saw Japan either have to bring Davids to the ground, retrieve the ball or push him into touch.

On this occasion they were not able to manage any of that, with four players wrestling with Davids for over a minute as they sought to get the ball free.

It’s one of the most bizarre moments you are likely to see on a rugby field as the game degenerated into what looked more like a bout of wrestling and grappling.

Blitzboks go on to score

Eventually Japan concede, allowing Davids to get to ground, and the Blitzboks recycle possession and go on to score through JC Pretorius.

A video clip of the incident, described as the “most bizarre Sevens passage of play ever” can be seen below: