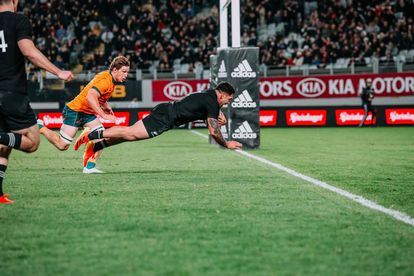 New Zealand locked away the Bledisloe Cup on Saturday with a record victory over Australia in a bitter, bruising encounter at Eden Park in Auckland. Photo: Twitter @Allblacks

New Zealand locked away the Bledisloe Cup on Saturday with a record victory over Australia in a bitter, bruising encounter at Eden Park in Auckland. Photo: Twitter @Allblacks

New Zealand locked away the Bledisloe Cup on Saturday with a record 57-22 victory over Australia in a bitter, bruising encounter at Eden Park in Auckland.

In a white-hot atmosphere with bone-crunching tackles echoing around the ground, the All Blacks scored eight tries to three to post their highest ever score over the Wallabies.

The Wallabies had vowed to take an aggressive approach and the All Blacks said they would fight fire with fire. By the 25th minute, referee Brendon Pickerill had to warn both sides to cut out the off-the-ball niggle.

New Zealand were ahead 21-15 at half-time and then opened up with five more tries and McKenzie’s booming penalty as the rain fell in the second half.

With the victory, they secured the Bledisloe Cup for a 19th consecutive year, made a winning start to the Rugby Championship and extended their unbeaten run at Eden Park to 46 matches.

They also crushed the hopes of frustrated Wallabies fans at a ground where Australia have not won in 22 Tests since 1986.

The previous high score by the All Blacks over Australia was 54-34 in Sydney in 2017.

READ | FROM TEST FAMINE TO FEAST FOR SPRINGBOKS IN 2021

The ability of the All Blacks backs to thread their way through the Wallabies was a key difference with the Australians enjoying the better of the forward exchanges in the first half.

The injection of Lachie Swinton and Matt Philip added much-needed steel to the Wallabies and they had mastery in the lineouts and scrums where the All Blacks had dominated a week ago.

It left both sides with plenty to work on as they head to Australia for the dead-rubber third Test in Perth and with Covid travel restrictions making it unlikely the All Blacks will be back in New Zealand until December.

After a sellout crowd of 47,000 watched a sub-par All Blacks with the first Test, only 25,000 turned up for the rematch and they hardly had time to take their seats when Rieko Ioane intercepted a Noah Lolesio cut-out pass and ran the length of the field to score.

The Wallabies replied immediately with Andrew Kellaway stepping around McKenzie for the first of his two tries.

Brodie Retallick scored the All Blacks second running the last 25 minutes to finish a move started by David Havili at the other end of the field.

Lolesio, having a better night with the boot than he did last week, kicked a penalty to keep the Wallabies in touch and in the countdown to half-time, Ardie Savea scored for the All Blacks with livewire scrum-half Tate McDermott touching down for the Wallabies.

After the resumption, it was all one-way traffic as Codie Taylor scored twice, Sevu Reece added his runaway try from another wayward cut-out pass by the Wallabies and Will Jordan also scored.

The All Blacks had raced to a 50-15 lead before the Wallabies were again able to put points on the board from Kellaway’s second try.

New Zealand, determined not to fade as the did in the first Test, finished the game with Havili scoring their eighth try.