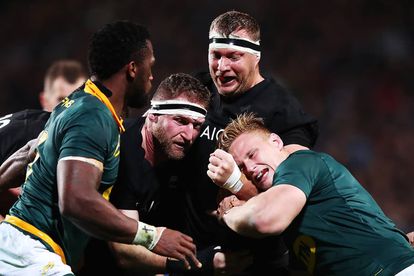 Kieran Read in action against the Boks back in 2017. Photo: Getty Images

Kieran Read in action against the Boks back in 2017. Photo: Getty Images

The Boks and All Blacks have just completed two blockbuster head-to-head battles in the Rugby Championship, which resulted in contrasting fortunes.

In the opening game, the Springboks overpowered New Zealand almost from start to finish, and came away with a resounding victory.

Yet, just a week later the visitors produced a much-improved showing, and dealt with the Boks’ set-pieces and aerial game far better. In the end, the All Blacks bounced back to claim a convincing victory of their own.

Former All Blacks captain Kieran Read has now suggested the the All Blacks succeeded in defusing the Bok ‘Bomb Squad’, and somewhat exposed a lack of variety in terms of the South African strengths.

“It was a testament to our start, which hadn’t been at our best all year. Guys put them under pressure and I think it paid dividends in the back end,” Read said on SENZ Radio’s the The Run Home Show.

“Even on the weekend where we played pretty well, there was periods of play where they were able to get a bit of a roll on. They could score points on us and put us under a lot of pressure. They are, in some cases you could say a one-trick pony in the way they play. It’s just a brutal game plan from them.

“It’s so brilliant, you know? (Makazole) Mapimpi chasing high balls, it’s not 50-50 when he’s chasing it. He’s catching everything. And they’ve got their maul. So you’ve got to give kudos to our forward pack for scrumming well and stopping the maul basically over the whole series. Stop them winning penalties to then kick to the corner and have another shot.”

Before New Zealand travelled to South Africa, it emerged that All Blacks coach Ian Foster had reportedly been told to step down if the team didn’t make improvements during the two Tests in SA.

New Zealand were coming off the back of a humbling series defeat against Ireland, while they then suffered a historic loss to the Springboks in the opening Rugby Championship match, which ramped up pressure on Foster and the team. Many reports suggested Crusaders coach Scott Robertson was ready to step in if need be.

There have been serious question marks hanging over the balance and quality of the current All Blacks squad, and Foster has increasingly come under fire since taking over the top job, while two of his assistant coaches – John Plumtree and Brad Mooar – were recently sacked.

Yet, with the All Blacks clinching a famous win over the Boks at Ellis Park this past weekend, it was thought that his job may have been saved, and this has now proven to be the case.

The New Zealand Rugby (NZR) Board has thrown their full support behind Foster as All Blacks head coach.

A recommendation that was agreed upon was for Joe Schmidt to be elevated to full-time assistant coach.

“Joe Schmidt has been on my radar, probably for a couple of years,” said Foster.

“We flagged at the start of this year that his role was to join us after the Irish series as an independent selector to replace Grant Fox and in addition he was going to do some opposition analysis work and work alongside myself in the strategy area.

“We started that after the Irish series and delighted with how that’s going. I have a great relationship with Joe.”

The All Blacks assembled in Christchurch on Sunday ahead of the next Rugby Championship clash with Argentina at Orangetheory Stadium.