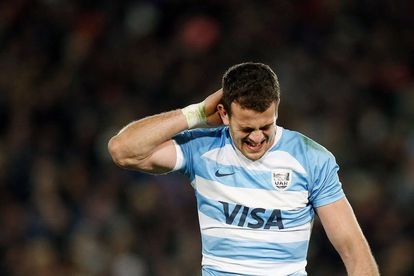 NELSON, NEW ZEALAND – SEPTEMBER 08: Emiliano Boffelli of Argentina reacts during The Rugby Championship match between the New Zealand All Blacks and Argentina at Trafalgar Park on September 8, 2018 in Nelson, New Zealand. (Photo by Anthony Au-Yeung/Getty Images)

NELSON, NEW ZEALAND – SEPTEMBER 08: Emiliano Boffelli of Argentina reacts during The Rugby Championship match between the New Zealand All Blacks and Argentina at Trafalgar Park on September 8, 2018 in Nelson, New Zealand. (Photo by Anthony Au-Yeung/Getty Images)

New Zealand were made to work to quell a spirited Argentina 46-24 in Nelson Saturday to remain unbeaten after the third round of the Rugby Championship.

A brief spurt before half-time and again in the closing minutes made the difference for the All Blacks against an unpredictable Argentinian attack.

The All Blacks wanted to make an emphatic statement to mark their first Test in Nelson, nearly 150 years after the city hosted the historic first game of rugby in New Zealand, and they did that by outscoring the Pumas six tries to three to claim the bonus point.

But it did not come easy against an Argentina side boosted by a convincing win over South Africa and who were ahead 7-3 after 15 minutes in their search for a first-ever win over New Zealand.

But, before a capacity crowd of 21,400, they could not handle the All Blacks trade mark closing burst which produced two late converted tries.

It meant Argentina’s dismal record against the All Blacks slumped to one draw and 26 losses from 27 Tests and they are closing in on the unwanted record of the team to play the most matches against New Zealand without a win currently held by Scotland on 31.

Pumas’ coach Mario Ledesma said before the game he did not believe the Argentinian pack was the potent force it once was and in the opening scrum he saw them rolled back as Karl Tu’inukuafe crushed Nahuel Chaparro Tetaz.

From the resulting penalty, Richie Mo’unga put the All Blacks on the board in the second minute.

Much had been made of Mo’unga getting a start at fly-half in only his second Test but it was flanker Shannon Frizell, also having his first start who made the biggest impact with his powerful running around the ruck.

A triple injury blow in the ninth minute for the All Blacks saw Ben Smith, Ngani Laumape (knee) and Brodie Retallick (shoulder) leave the field to be replaced by Damian McKenzie, Anton Lienert-Brown and Sam Whitelock.

In the 10 minutes it took Smith to return from his head injury assessment both sides had scored tries and the All Blacks were back in front 10-7.

Ramiro Moyano put Argentina briefly in front when he stepped around Mo’unga, TJ Perenara and Codie Taylor to score, while a Frizell rampage paved the way for Nehe Milner-Skudder to reply for the All Blacks.

Perenara extended the lead to 15-7 with a try diving around the side of a ruck, and when Matias Moroni was denied a try for Argentina when his foot brushed the touchline, Mo’unga ended the half with second penalty for the All Blacks.

Both sides traded points in the second half.

When Nicolas Sanchez scored and converted to get Argentina within four points of New Zealand, Ben Smith replied with a try for the All Blacks.

A penalty given away by Sanchez brought Perenara’s second try and when Sanchez put Emiliano Boffelli in to score in reply, the All Blacks came back with one through Frizell.

With time up, Jack Goodhue crashed over for the All Blacks sixth and bonus point try.