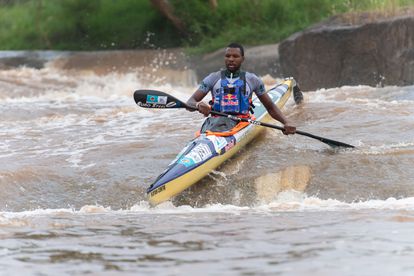 The Gresham Wealth Non-Stop Dusi’s most decorated paddler, Euro Steel’s Sbonelo Khwela will return in 2022 to try and win his unprecedented tenth title at the Dusi in a Day on 11 March.

The Gresham Wealth Non-Stop Dusi’s most decorated paddler, Euro Steel’s Sbonelo Khwela will return in 2022 to try and win his unprecedented tenth title at the Dusi in a Day on 11 March.

Following another podium finish at the Dusi Canoe Marathon last month, the Non-Stop Dusi’s most decorated paddler Sbonelo Khwela will be back to chase his tenth title on Friday 11 March.

Khwela has over the years proven his remarkable ultra-distance endurance. He has claimed nine wins at the ‘Dusi in a Day’ against some strong competition over the years and this year feels like a K1 charge is on the cards.

“It’s strange because when I do Dusi in a K2 I like to do Non-Stop in a K1 and feel stronger in my K1,” Khwela said.

“Paddling the Non-Stop is always a tough decision because after Dusi you are tired, but after a few days of recovery you see how the body feels and then make the decision.

“I love the challenge that 120km in one day brings. I love overcoming that challenge,” said Khwela.

Winning the Non-Stop is a refined process for Khwela. He’s now got it down to an art that he implements every year despite what the other boats do.

“The pace is so different to Dusi and it’s a lot slower which means that I like to catch up through the day.

“I don’t race from the start because then I know that I will blow and I let the guys go hard off the start line and at my second split I decide where I am going to attack.

“In a K2 it is different because you have someone else to consider and need to see how they are feeling but in my K1 I know when I can attack,” he explained.

The Non-Stop attracts a far smaller entry than the Dusi because of the magnitude of the challenge, however Khwela knows that this year’s field will include a number of competitive boats.

“Off the back of a good Dusi there should be a strong field for this year’s race. That always makes the race exciting,” he mentioned expectantly.

“There are usually three or four boats that I have to watch out for and I think that will be the same this year.”

Khwela will be looking to regain his position at the top of the results list after he finished third with Thomas Ngidi in 2021.