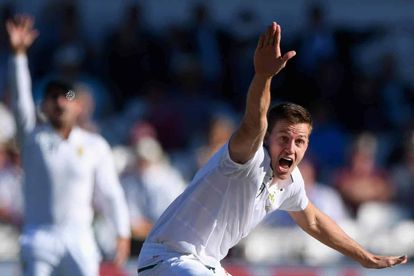 NOTTINGHAM, ENGLAND – JULY 16: South Africa bowler Morne Morkel appeals for the wicket of Alastair Cook which is overturned on review to the fourth umpire during day three of the 2nd Investec Test match between England and South Africa at Trent Bridge on July 16, 2017 in Nottingham, England. (Photo by Stu Forster/Getty Images)

NOTTINGHAM, ENGLAND – JULY 16: South Africa bowler Morne Morkel appeals for the wicket of Alastair Cook which is overturned on review to the fourth umpire during day three of the 2nd Investec Test match between England and South Africa at Trent Bridge on July 16, 2017 in Nottingham, England. (Photo by Stu Forster/Getty Images)

Morne Morkel grabbed his 300th Test wicket as he lead the charge when South Africa pinned Australia back with wickets on regular interval to finish the second day of the third Test at Newlands 66 runs to the good.

The visitors were at 241/9 at stumps in response to the hosts first innings total of 311 all out, thanks to a late surge in the final session by Nathan Lyon who, batting at number 10, smashed a quick 47 off 38 balls as he put on a partnership of 66 with wicketkeeper, Tim Paine.

That ninth wicket partnership chipped away at what looked set to be a daunting first innings deficit as South Africa’s pace trio of Morkel, Kagiso Rabada and Vernon Philander had them in a desperate position at 175/8.

Rabada was first to get the breakthrough as he took the big wicket of opener, Dave Warner, sending his off stump spiralling for 30 in the final ball of a fiery sixth over which saw the left-hander take 22 runs off the five deliveries he faced before he was sent packing.

The 31-year old again found himself in another off-field confrontation, this time with a spectator as the two exchanged a few words while making his way back to the dressing room.

Morkel accounted for the wicket of the next batsman in, Usman Khawaja, who hardly troubled the scorers as he was sent back for five on the board as well as the big one of captain, Steve Smith who continued to struggle in this series – also dismissed for five.

Also read: Elgar carries his bat as Proteas are bowled out for 311

Meanwhile, on the other end, Cameron Bancroft fought back as he raced to his third Test 50 in just 59 deliveries as he rebuilt the innings with Shaun Marsh.

The pair combined for a 78-run partnership, before the big moment when Morkel removed Marsh to become the fifth South African to 300 Test wickets.

The wicket sparked a mini collapse as Bancroft followed soon after, falling victim to Philander for a well-played 77 – his first wicket on the day, before Mitchell Marsh became his second scalp, out for 5.

Pat Cummins and Tim Paine briefly halted the collapse, but the former was back in the shed as he pushed Rabada outswinger out to the safe hands of AB de Villiers.

The De Villiers-Rabada combo was again back in action as, this time, they accounted for wicket of Mitchell Starc, who was out for two.

Enter Nathan Lyon, who capitalised on a tiring attack and, with sloppy work on the field, rode his luck as he and Paine made a significant dent on the Proteas first innings lead, before becoming Morkel’s fourth victim as the lanky speedster finished with figures of 4/87.