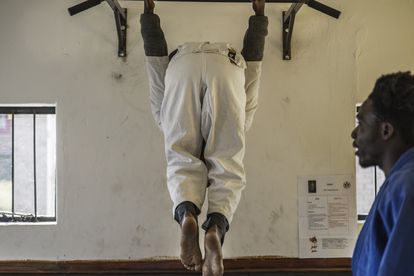 In a renovated building in a South African township about 20 children in judogi tumble around on a tatami under the watchful eye of a coach. Photo: MARCO LONGARI / AFP

In a renovated building in a South African township about 20 children in judogi tumble around on a tatami under the watchful eye of a coach. Photo: MARCO LONGARI / AFP

In a newly renovated white building in a South African township about 20 children in judogi and others in school uniforms tumble around on a tatami under the watchful eye of a coach.

FOR THE LATEST JUDO NEWS VISIT THE SOUTH AFRICAN WEBSITE

They are from a nearby primary school and regularly gather for judo classes here in Alexandra township, north of the Johannesburg inner city and in the shadow of the financial hub of Sandton.

The project aims to “use judo as a vehicle for … refugees, migrants (and) South Africans to meet together”, said Judo for Peace coordinator Roberto Orlando.

It’s a “platform to be all equal, to learn together and to develop skills and values all together”.

Alexandra is one of the poorest, most densely populated black townships in South Africa.

In 2008, more than 60 people – mostly migrant workers from other African countries – were killed in the country’s worst outbreak of xenophobic attacks since the end of apartheid.

Fourteen years on, the scourge of xenophobia, which mainly targets black Africans, has not left the township.

From time to time, violent attacks against African immigrants still occur in Alexandra and other townships where crime and unemployment is rife.

Such attacks are predominantly staged by jobless black South Africans.

This year has seen tensions rise again in Alexandra. For several months a vigilante group called Operation Dudula – “push back” in Zulu language – has staged marches demanding the expulsion of illegal immigrants.

Migrants especially from the Democratic Republic of Congo, Mozambique, Nigeria and Zimbabwe have borne the brunt of the anti-foreigner hostility.

One of the judo coaches is from the DR Congo

Orlando decided now, more than ever, was the best time to have a dojo in the township. It officially opened its doors last month.

“Alexandra is one of the biggest, most densely populated areas in South Africa. It is an area where many xenophobic attacks happened and I think it is one of the areas that should be targeted when we talk about teaching people how to live together,” he said.

At the heart of his teaching philosophy are the principles of self-control, discipline, respect, honour, courage and friendship.

One of the coaches is Rudolph Ngala. He is from the Democratic Republic of Congo.

Having a migrant coach is strategic because “people can get used to seeing refugees as someone who brings skills to the country”, Orlando said.

Ngala, 21, arrived in South Africa from Kinshasa in 2017 and immediately took up judo with Orlando. He has graduated to become a coach.

“Judo helped me a lot with (making) friends,” said Ngala.

“In Alexandra, everybody who lives here is like my family. I am Congolese. I am black. I am African. We are all African”.

Standing and cracking jokes with two South Africans after competing at a weekend event for World Refugee Day on Monday, Denzel Shumba, 17, who moved to South Africa with his family 10 years ago from Zimbabwe, also took up judo.

“South Africa (is) a difficult place sometimes because there’s xenophobia,” he said.

Shumba said taking up judo has helped him to become a calmer, more respectful and peaceful person, learn a valuable skill and make new friends.

And that is exactly what Orlando wants to see.

“South Africa is a bit of a showcase of what is happening in the world. We are all mixing up. People are migrating. More and more we need to learn from each other, to learn to live together, next to each other,” he said.

Orlando, athletic and with piercing blue eyes, is originally from Italy, but has worked in Ethiopia, Somalia, the Democratic Republic of Congo and now South Africa, setting up judo dojos to empower the youth and integrating people in disadvantaged communities.

The ten most valuable sports teams in the world right now

Debt sustainability and recovery in Africa under threat