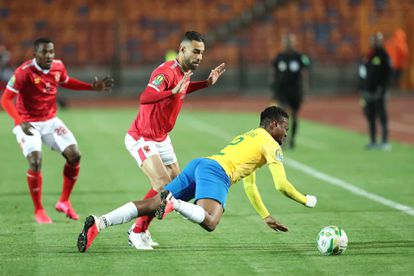 Mamelodi Sundowns vs Al Ahly: Pitso Mosimane’s side are set to take on the Club of the Century in the Caf Champions League quarterfinals on Saturday 7 March from 15:00.

The match will be played at the Lucas Moripe Stadium in Attridgeville and can be streamed on Mamelodi Sundowns Facebook page.

“The stream will be available at the top of our page 30 minutes before kickoff.”

Mamelodi Sundowns need to overturn a 2-0 deficit against the Egyptian Giants if they are to keep their hopes of an unprecedented quadruple alive.

Sundowns are very much in the PSL title race despite taking a two week break from Premiership action to compete in the Champions League.

Masandawana won the Telkom Knockout earlier in the season and are also in the last eight of the Nedbank Cup.

Sundowns coach Mosimane urged supporters to turn up in numbers to the Stadium in Attridgeville.

“We have to turn the volume up in Pretoria, we have to, we don’t have an option. We have to score in Pretoria,” said Mosimane in his pre-match press conference.

Mosimane believes there is no reason for his team to panic at a two goal deficit but with the away goals rule in effect Downs will need to be wary of conceding.

“We are professionals we need to keep calm, we need to respect the game. We scored 11 goals in one match, so we can score two goals,” Mosimane added.

Mosimane took the defeat in Egypt well, congratulating Al Ahly on the performance.

Congratulations to Ahly, I think they are a good team, big team, lots of pressure and they managed to deal with the pressure,’ Mosimane told his club’s official website.