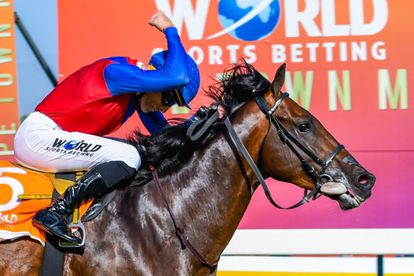 Having captured the Durban July in 2021, wild celebrations were sparked when the popular four-year-old colt entered the winner’s circle and was embraced by his owner, Ashwin Reynolds and friends and family.

The humble origins of his owner Reynolds, who is a Cape Flats builder, has given the horse a special place in the hearts of people both in Cape Town and further afield.

After winning the Durban July and making South African racing history, Reynolds said: “I was saying to myself. ‘Do you really know what you did?’ It is breath-taking. I can’t explain it. You can buy a horse for R10 million or R55,000. It doesn’t matter. Because this is what it is all about. I am really chuffed to be part of South African history.

“From my heart, I want to thank the people of the Cape Flats for shouting for this horse and I now hope people will be able to approach trainers to get into this game and enjoy it the way I am.

Reynolds is one of the great characters of the South African horse racing scene and this win should be just as well received. Who knows there could even be more success for the champion horse in the near future.

Kommetdieding was expertly ridden home by jockey Gavin Lerena. The 2-1 favourite pairing have now completed the rare Durban July-Met double and confirmed Kommetdieding as inarguably the best racehorse in South Africa at present.

Trained in the small yard of veteran Harold Crawford and daughter Michelle Rix and owned by Reynolds, the four-year-old colt raced just off the pace of the Grade 1 2,000m contest before surging clear in the final 100m, to beat Jet Dark (9-2) Linebacker (4-1) and Double Superlative (7-1).

On This Day: What happened on 28 July?