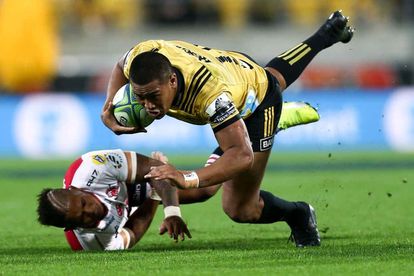 WELLINGTON, NEW ZEALAND – MAY 05: Julian Savea of the Hurricanes is tackled by Elton Jantjies of the Lions during the round 12 Super Rugby match between the Hurricanes and the Lions at Westpac Stadium on May 5, 2018 in Wellington, New Zealand. (Photo by Hagen Hopkins/Getty Images)

WELLINGTON, NEW ZEALAND – MAY 05: Julian Savea of the Hurricanes is tackled by Elton Jantjies of the Lions during the round 12 Super Rugby match between the Hurricanes and the Lions at Westpac Stadium on May 5, 2018 in Wellington, New Zealand. (Photo by Hagen Hopkins/Getty Images)

A botched call, a hot wing and the rampant Jaguares feature in our talking points after week 12 of the Super Rugby season.

Kurtley Beale’s baffling decision to cross-kick to Israel Folau in the final minute of the Waratahs’ 24-21 loss to the Blues was down to mistakenly believing his team had a penalty advantage.

The Tahs were laying siege to the Blues try-line for most of the second half and had put themselves into a position to win the match.

After 19 phases in the dying minutes Beale kicked just too high for Folau in the right corner when keeping ball in hand was the better option. The ball went out and with it the Waratahs’ remaining hopes.

“I thought that was a penalty advantage because I saw the arm get stuck out a bit before,” skipper Michael Hooper said.

“We probably missed the trick on that one, and Kurtley was probably feeling the same way.”

A hat-trick for Ben Lam against the Lions saw the Hurricanes’ flyer soar ahead on the top try scorer’s list with 12, three more than the next best Emiliano Boffelli from the Jaguares.

But being big, fast and the best finisher in the competition is no guarantee that “Blam” is a certainty to make the All Blacks for next month’s Test series against France despite growing calls for his selection.

The head cheerleader is ‘Canes coach Chris Boyd who dismisses any criticism that the 26-year-old wing is suspect under the high ball and on defence.

“He works really hard off the ball, he’s a wonderful tryscorer, he’s good in the air, he’s a good defender, he’s physical. He’s just in a purple patch where all of that’s come together, so if he’s got deficiencies I haven’t seen them,”  Boyd said.

It won’t be easy for Lam to break into the All Blacks crowded pool of outside backs already comprising Waisake Naholo, Nehe Milner-Skudder, Rieko Ioane and Matt Duffie with 2015 World Cup star Julian Savea returning to form and Israel Dagg coming back from injury.

Jaguares coach Mario Ledesma is attempting to keep a lid on hopes of a place in the finals for the first time after the Argentines upset the Chiefs 23-19 to notch four straight wins on the road.

“Well, now it’s going to be hard not to talk about that, we are on the road to the playoffs if we keep winning,” said the former Pumas prop.

“But I don’t think we are at that point, we just need to concentrate on our job and keep working hard, and don’t lose that focus.

“If not we’ll get a little bit dizzy, so we’ll just keep the boys grounded.”

However, Ledesma admitted he was proud of his players’ efforts:

“We’d never beaten a Kiwi side, and now we’ve beaten two on the road (Chiefs and Blues),” he said.

“So really proud of the work they’ve put in since the beginning of the season, and I hope everybody in Argentina is proud too.”

Man-of-the-match Pieter-Steph du Toit said Stormers’ 29-17 triumph over the Bulls was critical as they try to woo dissatisfied supporters back to Newlands stadium.

“Many Stormers fans have written us off for this season,” said the lock-cum-flanker, referring to only four wins in 10 outings before the Cape Town showdown with the Bulls.

“Hopefully, this win will persuade many doubters to come back to Newlands. We have five league fixures to play, including three at home, so reaching the play-offs is a realistic goal.”

Springbok Du Toit starred in defence, with ball in hand, at lineouts, and his audacious offload set up hooker Ramone Samuels for a try that left Stormers just a point off the play-off places.

The Melbourne Rebels are reeling from the news that they will be without Wallabies general Will Genia for at least the next three games.

Key half-back Genia returned Friday after missing two matches with a hamstring strain and then injured his knee in the Rebels’ 55-10 loss to the Canterbury Crusaders at home.

Scans revealed a low-grade tendon strain but Genia is still likely to be out for a month and miss season-defining games with the ACT Brumbies, Japan’s Sunwolves and Auckland Blues.

The Rebels have lost their last five games to fall behind the NSW Waratahs at the head of the Australian conference, but captain Adam Coleman is defiant.

“I’ve got full confidence in the team and I know something special is going to happen within this team,” Coleman said after seeing his team cave in and concede 45 unanswered points after Genia departed with the score at 10-10 in the 38th minute.