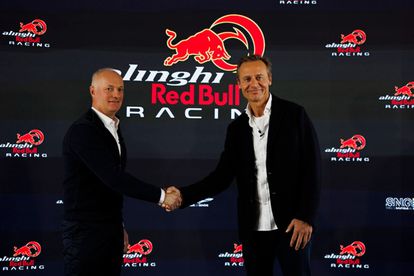 Red Bull is entering a team in the America’s Cup in a move that will take its bitter Formula One rivalry with Mercedes onto the water. Photo: America’s Cup website

Red Bull is entering a team in the America’s Cup in a move that will take its bitter Formula One rivalry with Mercedes onto the water. Photo: America’s Cup website

Red Bull announced on Wednesday it was entering a team in the America’s Cup yacht race, in a move that will take its bitter Formula One rivalry with Mercedes onto the water.

“Our F1 team is looking forward to helping this new member of our family to succeed… we will share our experiences, engineering tips, etc. It is a two-way cooperation,” he said in a statement.

READ | REMEMBER THIS? SPRINGBOKS CATCH UP WITH MAX VERSTAPPEN!

Rival syndicate Ineos Britannia already has close ties to Mercedes, which has been involved in a furious tussle with Red Bull during the FI season.

It culminated in Red Bull’s flying Dutchman Max Verstappen being controversially crowned world champion over Mercedes’ Lewis Hamilton of Britain this week, in a result the German team looks set to appeal.

Both yachting teams will bring F1 technology to the spectacular 23-metre (75-foot) AC75 foiling monohulls used during the last America’s Cup, won by Team New Zealand off Auckland in March.

Alinghi, owned by Swiss billionaire Ernesto Bertarelli, won the America’s Cup in 2003 and 2007 but has not competed since 2010.

Venue for next America’s Cup yet to be decided

Team New Zealand chief executive Grant Dalton said applying more F1 expertise to the foiling yachts promised to make the next edition of the America’s Cup one of the most exciting ever.

“We are seeing the merging of two of the most technologically advanced sports in the world on land and on the water, which is only going to be a good thing for the competition and the growth of the sport and its audiences,” he said.

The venue of the next America’s Cup in 2024 is yet to be determined, although Dalton has said it is unlikely to return to Auckland for financial reasons.