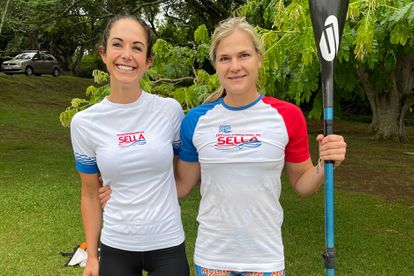 Bridgitte Hartley has acquired the services of Pippa McGregor for the 71st edition of the Dusi Canoe Marathon in 2022. Photo: Supplied /
Gameplan Media

Bridgitte Hartley has acquired the services of Pippa McGregor for the 71st edition of the Dusi Canoe Marathon in 2022. Photo: Supplied /
Gameplan Media

With two months to go until the 2022 Dusi Canoe Marathon, Bridgitte Hartley has acquired the services of Pippa McGregor for the 71st edition of the famous race from 17-19 February.

Hartley’s 2022 season was up in the air following the conclusion of the Fish River Canoe Marathon but an approach from the current mixed doubles record holder twisted her arm and the combination has been taking shape since then.

“Pippa approached me and I wasn’t sure whether Dusi was going to be part of my plan but I thought it was a great opportunity to get back on the Dusi,” Bridgitte Hartley said.

“We paddled the Umpetha Challenge together and I felt that we were really solid in the boat together and apart from a shock at Taxi Rapid we had a good race.

“Our running felt solid even though it’s always tough, especially that first portage of the season, but we are confident that we can give the Dusi a good go next year.”

McGregor has been paddling consistently well recently, evidenced by her third at the Fish with Jordan Peek and for Hartley it’s exciting to see her putting in the hard work.

“She has been paddling really nicely and has had some good motivation from (her husband) Hank (McGregor) which is fantastic,” said Hartley. We are both in KZN which makes training together a bit easier.

“Pippa is heading down to the Cape Point Challenge so she will have a lot of mileage in her when we start the Dusi.

“I am looking forward to taking on some of the pre-Dusi races as well as the Lighthouse Designs Ozzie Gladwin, which is SA K2 River Championships, because we will get a good idea of where the other women’s crews are at ahead of Dusi.

Bridgitte Hartley wants them to race their own Dusi Canoe Marathon

The women’s race is shaping up to be one of the most exciting in years with the rumour mill working overtime. However for Hartley she wants them to race their own race over the three days.

“I just hope that I can give Pippa the same confidence that Hank does because if I can then I think we will be fine.

“She is a Dusi record holder so I really hope that she doesn’t forget that form!

“We are both looking forward to the race and are excited to give a good shot.”