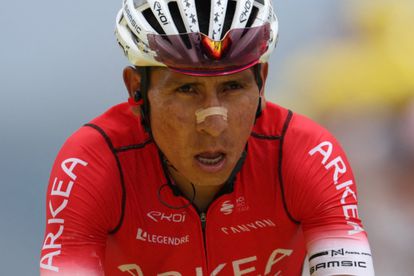 Colombian Nairo Quintana has been retrospectively disqualified from this year’s Tour de France after testing positive for tramadol, the International Cycling Union (UCI) announced on Wednesday.

The pain medication has been banned by the UCI since 2019.

“The Union Cycliste Internationale (UCI) announces that the Colombian rider Nairo Alexander Quintana Rojas has been sanctioned for an infringement of the in-competition ban on using tramadol as set out in the UCI Medical Rules with the aim of protecting the safety and health of riders in light of the side-effects of this substance,” the body said.

“The analyses of two dried blood samples provided by the rider on 8 and 13 July during the 2022 Tour de France revealed the presence of tramadol and its two main metabolites.

“In accordance with the UCI Medical Rules, the rider is disqualified from the 2022 Tour de France. This decision may be appealed before the Court of Arbitration for Sport (CAS) within the next 10 days.

“As this is a first offence, Nairo Alexander Quintana Rojas is not declared ineligible and can therefore participate in competitions,” it added.

FOR THE LATEST CYCLING NEWS VISIT THE SOUTH AFRICAN WEBSITE

On Tuesday, Quintana’s Arkea-Samsic team announced he had signed a contract extension until 2025 and has been included in their squad for the Vuelta a Espana which begins on Friday.

“I consider the Team Arkea-Samsic to be a family in which I feel at home,” Quintana said.

“I very quickly became convinced that I still had some great sporting challenges to take up under the Arkea-Samsic jersey and that our beautiful common history initiated since 2020 could only continue,” he added.

Quintana won the Giro d’Italia in 2014 and the Vuelta two years later.