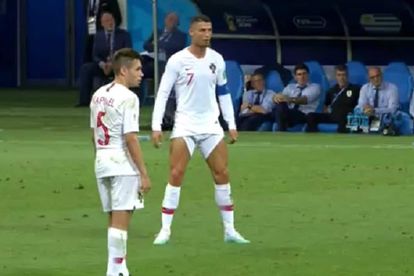 Cristiano Ronaldo was sent off with what some called a harsh red card during his Champions League debut for Juventus on Wednesday. You can watch the incident – and Ronaldo in tears – over here.

Ronaldo scored in United’s 2-0 win away to Aston Villa on the final day of the season, but was booked twice for diving and time wasting late on.

His first booking was eventually rescinded meaning he didn’t have to serve a suspension.

The Portuguese was shown a straight red card for a late challenge on former United favourite Andy Cole as the Red Devils went on to lose the Manchester derby 3-1.

A straight red card and three-match ban was again dished out to Ronaldo for an apparent headbutt on Portsmouth midfielder Richard Hughes in a 1-1 draw at Fratton Park.

Ronaldo saw red in a Manchester derby once more, this time for two bookable offences after a trip on Shaun Wright-Phillips and then an inexplicable handball.

A first red card in La Liga came in Ronaldo’s debut season for two petulant late bookings coming after he had missed a penalty and also scored Los Blancos’ fourth goal in a 4-2 win.

Just a month later Ronaldo doubled his count of red cards at the Bernabeu when he elbowed Malaga midfielder Patrick Mtiliga in the face as he tried to escape the Dane’s clutches. Earlier, the Portuguese had scored both Madrid’s goals in a 2-0 win.

On a disastrous night for Real as they lost a Madrid derby for the first time in 14 years, Ronaldo kicked out at Atletico captain Gabi in the final few minutes and was shown a straight red.

Ronaldo was given a three-game ban after clashing with Athletic defender Carlos Gurpegi and then showing his disagreement with the referee when he was shown a straight red card as he left the field.

Arguably his most violent discretion as he kicked out at Cordoba defender Edimar.

Ronaldo packed plenty of action in a 24-minute appearance as a second-half substitute as he smashed into the top corner to give Madrid a 2-1 lead.

However, his decision to celebrate by removing his shirt to flex his muscles proved costly as he was booked and just two minutes later saw a second yellow card for diving in the referee’s eyes in an attempt to win a penalty.

Ronaldo ends his Champions League debut for Juventus in tears after being sent off against Valencia.

Ronaldo was shown a red card by German referee Felix Brych in the 29th minute at Estadio Mestalla after an altercation with Valencia defender Jeison Murillo.

Kaizer Chiefs weren’t ever in the title race

On This Day in South Africa: What happened on 09 January?