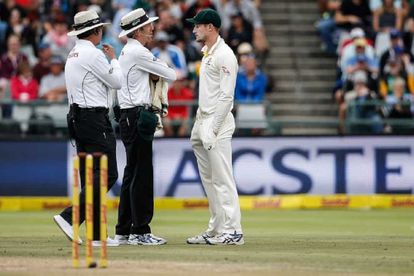 Australian fielder Cameron Bancroft (R) is questioned by Umpires Richard Illingworth (L) and Nigel Llong (C) during the third day of the third Test cricket match between South Africa and Australia at Newlands cricket ground on March 24, 2018 in Cape Town.

Australian fielder Cameron Bancroft (R) is questioned by Umpires Richard Illingworth (L) and Nigel Llong (C) during the third day of the third Test cricket match between South Africa and Australia at Newlands cricket ground on March 24, 2018 in Cape Town.

Disgraced Australian stars David Warner and Cameron Bancroft will return to competitive cricket at a low-level limited-overs tournament in the country’s tropical north in July, it was announced Tuesday.

Warner is serving a year-long ban from state and international cricket and Bancroft a nine-month suspension over a ball-tampering scandal in South Africa in March that rocked the game.

But they are allowed to appear at club level in Australia and in domestic tournaments abroad.

As they work to rebuild their careers, the duo will feature in the NT Strike League in Darwin, a month-long Twenty20 and one-day event that features four franchises — Desert Blaze, City Cyclones, Northern Tide and Southern Storm.

Bancroft is available for the entire tournament with Warner committing to two one-dayers on 21 and 22 July.

“We’re delighted that Cameron and David will be joining us in Darwin for the Strike League,” said Northern Territory Cricket chief Joel Morrison in a statement.

“Their presence and experience will be invaluable for our local players.”

Warner, who is also set to play for his Sydney club side Randwick Petersham from September, spent time running cricket clinics last month in Darwin.

He said he was keen to be part of a league that is designed to give emerging players experience against interstate and international talent.

“I’m really looking forward to playing in the Strike League in July,” he said.

“I heard so much about the competition while I was in Darwin earlier this month that I’m keen to be part of it.”

Former Australian captain Steve Smith, who was also suspended over the tampering incident, is set to make his return at an inaugural Global T20 Canada event in Toronto from 28 June to July 2015.