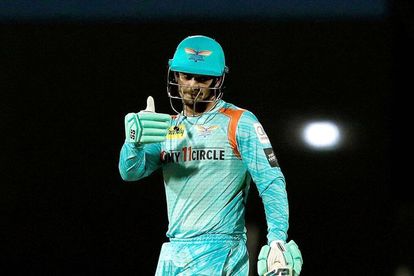 Proteas wicketkeeper-batsman Quinton de Kock has been announced as the first signing by the Durban franchise in CSA’s T20 League. Photo: IPL

Proteas wicketkeeper-batsman Quinton de Kock has been announced as the first signing by the Durban franchise in CSA’s T20 League. Photo: IPL

Proteas wicketkeeper-batsman Quinton de Kock and West Indies all-rounder Jason Holder have been announced as the first signings by the Durban franchise in CSA’s T20 League.

De Kock and Holder will be joined by another Windies all-rounder Kyle Mayers as well as England seamer Reece Topley and local pick Prenelan Subrayen.

The franchise in Durban is owned by the RPSG Group, that owns Lucknow Super Giants in the Indian Premier League (IPL).

All six franchises are required to submit at least five players as direct signings before the auction with teams allowed one capped South African, three overseas players and an uncapped player.

Dr Sanjiv Goenka, Chairman of RPSG Group, said: “I welcome all the players to the RPSG Durban family.

“It’s a new beginning, full of hope and promise. We are confident that the talented players will add to the foundation of the team and will uphold our core philosophy of performance.”

De Kock, Holder and Mayers were part of the Super Giants’ squad that made it into the playoffs in what was their maiden IPL campaign this year.

All six teams in the new CSA T20 League, which is set to start in January next year, been bought by groups that own teams in the IPL and are allowed to select a total of 17 players.