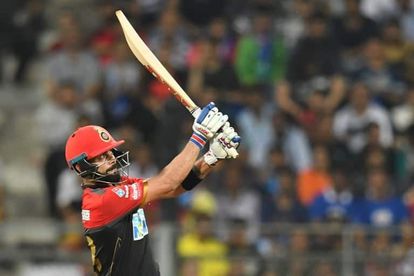 Virat Kohli was caught first ball of the match with a mis-timed hit to short midwicket, but skipper Faf du Plessis hit an unbeaten 73 to guide Bangalore to 192/3 in Mumbai.

Sri Lankan spinner Wanindu Hasaranga then returned figures of 5-18 to help dismiss Hyderabad for 125 in 19.2 overs as Bangalore, who are searching for their maiden Indian Premier League title, stayed fourth in the 10-team table.

Hyderabad, led by Kane Williamson, slumped to their fourth straight loss as the Twenty20 tournament moves towards the business end and teams jostle for playoff spots.

Virat Kohli has only one half-century in IPL 2022

It was Kohli’s third dismissal in the current IPL on the first ball, after two in successive matches last month.

The 33-year-old batter and former India captain has scored just 216 runs in 12 matches with just one half-century.

Du Plessis and Rajat Patidar, who made 48, then put on 105 runs to take the attack to the opposition bowlers with speedster Umran Malik going for 25 runs off his two overs.

Faf du Plessis reached his second half-century of the season with a boundary, but Suchith denied Patidar his fifty to return figures of 2-30 from his four overs.

Du Plessis kept up the attack and found company in Glenn Maxwell, who hit two sixes before getting out in the 19th over for 33.

In-from Dinesh Karthik made an eight-ball 30 to finish with a flourish as he hit three sixes and boundary in a 25-run 20th over by IPL debutant and Afghanistan fast bowler Fazalhaq Farooqi.

Hyderabad lost Williamson with a run-out off a direct throw from Shahbaz Ahmed on the first ball of the innings and Maxwell bowled Abhishek Sharma four deliveries later with his off spin.

Hasaranga then took over with his leg spin to rattle the Hyderabad batting with regular strikes in his four overs including one maiden.