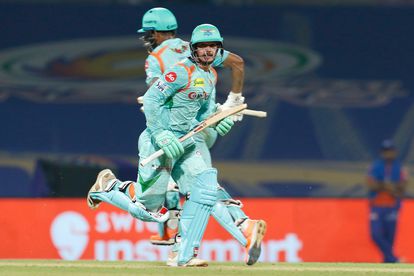 Krunal Pandya’s unbeaten cameo of 19 and Quinton de Kock’s 80 off 52 balls gave Lucknow Super Giants a six-wicket win for over Delhi Capitals on Thursday in the Indian Premier League.

REMINDER | WHEN WILL MARK BOUCHER LEARN FATE OVER MISCONDUCT CHARGES

Rishabh Pant-led Delhi set a target of 150 after Lucknow skipper KL Rahul won the toss and decided to field first.

South African opener De Kock set up a smooth chase for Lucknow and hit nine fours and two sixes before falling to Kuldeep Yadav’s left-arm wrist spin with his team 28 short in the last four overs.

His opening partner Rahul also fell to Yadav after scoring 24 off 25 balls.

Indian all-rounder Pandya hit one six in his 14-ball innings and shared key partnerships with Deepak Hooda, 11 off 13 balls, and rookie Ayush Badoni, 10 off 3, to seal a last-over win.

Yadav was the most potent Delhi bowler and took two wickets in 3.4 overs and gave away 31 runs.

Lalit Yadav, an uncapped all-rounder who hails from Delhi, bowled four overs for 21 runs and took one wicket.

Shardul Thakur took the only other wicket of the innings and gave up 29 runs in his 3.4 overs.

All batters, except Prithvi Shaw, for Delhi, and De Kock found it hard to hit free-flowing strokes on the wicket.

When Shaw opened – hitting 61 off 34 balls, with nine fours and two sixes – Delhi looked set for a much higher total.

But after Shaw fell to the off-spin of Krishnappa Gowtham, who only gave away 23 runs in his four overs, Lucknow bowlers put a brake on the Delhi innings.

Rovman Powell also fell to Bishnoi – who took two wickets for 22 runs in his four overs – after scoring three off 10 balls.

The Delhi skipper said that “the game changed in the middle overs.”

“The spinners bowled well, but we were 10-15 runs short,” Pant added after the loss.

The world’s most valuable cricket tournament has been expanded to 10 teams and 74 matches, but league games will be restricted to four venues in Mumbai and Pune with limited crowds because of coronavirus-related restrictions.