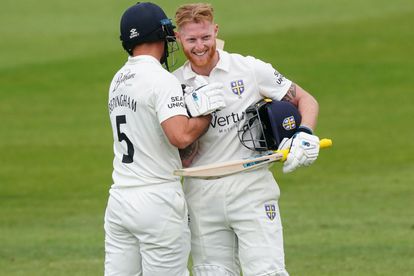 Ben Stokes smashed 34 runs in an over during a 161 from 88 balls knock for Durham, his first innings since being named England Test captain. Photo: PA

Ben Stokes smashed 34 runs in an over during a 161 from 88 balls knock for Durham, his first innings since being named England Test captain. Photo: PA

Ben Stokes smashed 34 runs in an over during a record-breaking 161 from 88 balls for Durham on Friday – his first innings since being appointed as England Test captain.

The big-hitting all-rounder, who was announced as Joe Root’s successor last week, went to a hundred off just 64 balls to post Durham’s quickest first-class century, while the 17 sixes he hit represented a new record for the English County Championship since it officially started in 1890.

Stokes is making his first appearance in this season’s championship following a knee injury on the tour of the West Indies.

He walked to the crease with Durham on 360 for four on the second morning of their four-day match against Worcestershire and launched a boundary barrage.

The left-hander took just 47 balls to reach his half-century but then went into overdrive, with his second 50 taking just 17 deliveries.

The first five deliveries of Baker’s 20th over were muscled over the boundary rope by Stokes, who raised his bat after the fifth to celebrate reaching three figures, having clubbed 10 sixes in total.

Ben Stokes was one blow from matching Garfield Sobers

Stokes was one blow away from emulating West Indies great Garfield Sobers, the only batsman in Championship history to hit six sixes in an over, having done so for Nottinghamshire in 1968.

But he was ultimately left thumping his pads with his bat in frustration after merely hitting a four, sparing Baker from joining ex-Glamorgan seamer Malcolm Nash in an undesirable club.

Baker was taken out of the attack but Stokes’ freewheeling batting continued as he went to lunch on 147 not out from 82 balls, including 15 sixes.

The first ball after the resumption saw Stokes continue where he had left off by smashing his 16th six.

He then hammered his 17th – breaking the previous county record held jointly by Andrew Symonds, the former Australia all-rounder, and Graham Napier – by lofting Brett D’Oliveira’s leg spin straight down the ground.

Stokes’ fearsome assault eventually finished when he holed out to deep midwicket in D’Oliveira’s next over, ending a 220-run stand with David Bedingham (135) before Durham declared on 580 for six shortly afterwards.

The 30-year-old Stokes is due to start his England reign in the first Test against New Zealand, the land of his birth, at Lord’s from June 2.