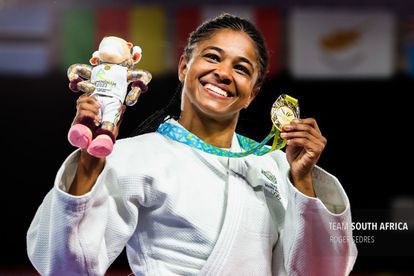 SIX more medals came Team SA’s way at the Commonwealth Games on Monday, taking their tally to 12 and leaving them in fifth spot on the table. Photo: TeamSA/Roger Sedres

SIX more medals came Team SA’s way at the Commonwealth Games on Monday, taking their tally to 12 and leaving them in fifth spot on the table. Photo: TeamSA/Roger Sedres

SIX more medals came Team South Africa’s way at the Commonwealth Games on Monday, taking their tally to 12 and leaving them in fifth spot on the table, writes Gary Lemke from Birmingham.

A top-six finish on the table has always been the Team SA target for these Games, and they have pulled themselves two golds clear of India in sixth position and three ahead of Scotland in seventh.

So far so good, and it should get even better on Tuesday.

The Women’s Fours bowls team are in the gold and silver final showdown, while in the pool Lara van Niekerk and Tatajana Schoenmaker look like they will go 1-2 in the 50m breaststroke.

Monday, however, belonged to judo player Michaela Whitebooi who won gold, while she had plenty of backup from fellow Team SA medallists spread across three different codes.

Silver medals came the way of Pieter Coetze, who narrowly missed adding gold to his 100m backstroke title when pipped in the 50m final, while Erin Gallagher, such a precocious talent over the years, blazed her way to a silver in the women’s 100m butterfly. Sure, she will share silver in a rare swimming dead heat, but she very nearly upstaged 17-time Commonwealth Games medallist Emma McKeon at the wall.

Elsewhere, medals were secured by Caitlin Rooskrantz who continued gymnastics’ dream Games when she took the bronze medal in the women’s uneven bars, while Team SA flag bearer Christiaan Sadie swum to the bronze medal in the S7 50m freestyle. And, for good measure, Charne Griesel (judo 52kg) won bronze after coming through the repechage and doing it the hard way.

For Coetze, the backstroke gold and silver coming at the age of 18 suggests that he is going to become a household name in South African sport.

Whitebooi was tasting her career highlight at the age of 26, but it has always been the plan that we will see the best of her at the 2024 Paris Olympics. She claimed the Commonwealth Games title in the 48kg division by winning three fights in a day.

CONFIRMED: Here are the NSFAS allowances for 2023

Truck rear-ends another on the N2 in Umhlanga