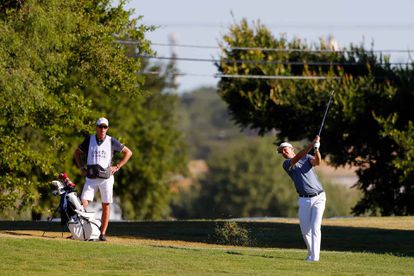 Justin Rose of England plays a shot on the 14th hole during the first round of the Charles Schwab Challenge on June 11, 2020 at Colonial Country Club in Fort Worth, Texas. (Photo by Ronald Martinez/Getty Images)

Justin Rose of England plays a shot on the 14th hole during the first round of the Charles Schwab Challenge on June 11, 2020 at Colonial Country Club in Fort Worth, Texas. (Photo by Ronald Martinez/Getty Images)

Britain’s Justin Rose fired a seven-under opening round of 63 on Thursday 11 June to claim the early lead as the US PGA Tour returned with the Charles Schwab Challenge.

The 2013 US Open champion, Rose, birdied seven of his first 12 holes then closed with six pars to grab a one-stroke clubhouse lead over Venezuela’s Jhonattan Vegas and Mexico’s Abraham Ancer at the Colonial.

No spectators were allowed at Colonial, which featured increased safety measures such as social distancing and temperature taking in the wake of the deadly disease outbreak.

Branden Grace carded a four-under 66 for a share of tenth spot and is the best-placed South African in the field after 18 holes. Louis Oosthuizen and Christiaan Bezuidenhout came in one under for a share of 42nd at the Charles Schwab Challenge with just over half the field having played through.

World number one Rory McIlroy, second-ranked Jon Rahm and third-ranked Brooks Koepka teed off in the feature afternoon group in Fort Worth, Texas.

Spain’s Rahm could overtake four-time major winner McIlroy for the top spot with a win if the Northern Ireland star finishes in a four-way tie for second or solo third or worse.

Prime scoring conditions greeted players with sunny skies and little to no wind.

England’s Rose began on the back nine and opened with a 25-foot birdie putt at 10, then sunk a birdie from eight feet at the 12th and followed by sinking an 18-footer for birdie at the par-3 13th.

Rose’s luck was in on PGA Tour return

Golf’s first men’s Olympic champion struck again at the par-3 16th, holing a 12-foot birdie putt, and then ran off three birdies in a row to begin his second nine — making a four-foot putt at the par-5 first, a six-footer at the second and a 13-footer at the par-4 third.

The Venezuelan put his approach at the fifth three feet from the pin and made the birdie putt to pull within one of Rose, but slipped up on the green and made bogey at the par-3 eighth before closing with a 21-foot birdie putt at the ninth.