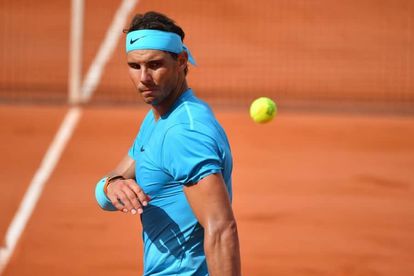 The rain couldn’t have come at a better time for top seed Rafael Nadal who was far from his best against Argentina’s Diego Schwartzman during Wednesday’s French Open quarterfinal which will resume on Thursday with the Argentine a set up.

Schwartzman broke through the gates swinging freely much to the surprise of the world number one and it didn’t take long for him to make his mark.

The 25-year-old, who sent South Africa’s Kevin Anderson packing on Monday, signalled his intent early on by breaking Nadal in the third game only for the Spaniard to break back immediately. But the fightback was shortlived and with Nadal struggling with his winners/unforced error count, it didn’t take long for Schwartzman to secure another break in the 9th game before sealing the first set in 68 minutes.

It was the first time since 2015 that Nadal had lost a set ending his streak of consecutive sets won in Paris at 37.

With his wrist taped up, Nadal soon ran into trouble once more during his second service game with Schwartzman only needing one break point to storm 2-1 ahead. But in true Rafa style, Nadal drew level setting the scene for yet another tight set only to be broken yet again with Schwartzman banging forehand winners from all areas of the court.

Minutes later, only adding to the unfolding drama, rain set in and play was soon suspended with the world number 12 a set and a break up.

The 46-minute break seemed to do Nadal the world of good however as he raced to a 5-3 lead. While the 10-time French Open champion revved the crowd up sensing a revival, his agitated opponent muttered away before looking to the umpire to suspend play after yet another shower.

Play will resume at 12:00pm on Thursday with Nadal serving for the second set.

It has been a rather uncharacteristic display with only eight winners coming off the Spaniard’s racquet compared to 23 unforced errors. He has also only managed to win half of the points coming off his first serve.

He has used a rain delay to his favour in recent times when he overcame Germany’s Alexander Zverev’s challenge during the Rome Masters final last month.

Schwartzman will no doubt come out fighting on Thursday with his never-say-die attitude so it will be interesting to see how the break has affected the two players in what has already been one helluva match.

Rain ☔️ in Paris, match postponed. Back at the hotel and time to regroup a bit for tomorrow #weknewitwastough