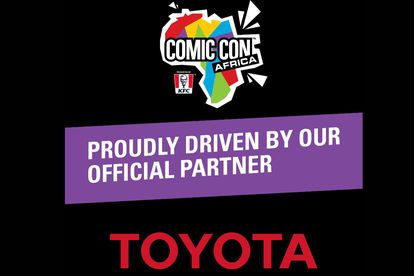 Toyota South Africa Motors [TSAM] is delighted to announce its partnership with Comic Con Africa as the official vehicle partner. Over the past two years, TSAM entrenched itself as a leader in gaming and pop culture, with the launch of The Toyota Gaming Engine [TTGE], a home for gaming and esports enthusiasts. Comic Con Africa prides itself on bringing people with diverse backgrounds together through their mutual passions, making it the perfect fit for SA’s most loved car brand, Toyota, and TTGE.

As visitors, exhibitors, gamers, cosplayers, and other fans prepare for Comic Con Africa 2022, these two brands with international pedigree are investing in pop-culture communities like never before.

Over the four-day line-up where over 60 000 guests are expected to share the Comic Con Africa experience, TSAM will be front and centre as the official driving partner of Comic Con. Guests will be invited to take part in the TTGE Comic Con Sim Rig Championship set in the fast-paced world of Gran Turismo 7, played on PS5. To win their share of R5 000 cash, they’ll have to test their ability to put together the perfect lap in a Toyota GR car.

Racers who can’t attend Comic Con Africa still have a chance to prove their skills online in TTGE Drive to Survive: GT Challenge, a Time Trial tournament for monthly cash prizes. The first round kicks off on 10 October.

How to enter the online tournament:

TTGE is home to all Toyota esports action from South Africa, the world, and beyond. Whether you’re a serious gamer or a newbie, sign up to join a community of fans who play for the sport of it. Members get access to tournaments and challenges across the most popular titles, as well as other exclusive content including pro tips and breaking news.

The Comic Con Africa weekend will be held from 22 – 25 September 2022, at Nasrec Expo Centre, in Johannesburg. Comic Con Africa is a multi-genre entertainment and comic convention that features comic books, games, arts, movies, pop culture elements and so much more.

For more virtual racing and motoring integrations, follow our stories here. Let us know in the comments if you’re excited for Comic Con Africa.

AmaZulu 4-0 Kaizer Chiefs: Glamour Boys haunted by ghosts from the past in dismal defeat