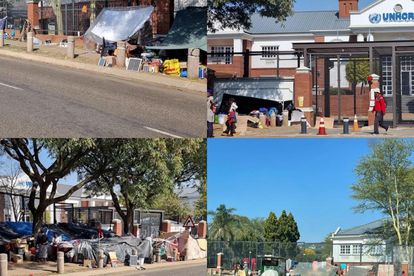 A group of refugees and asylum seekers have taken over the sidewalk on Waterkloof Road in Brooklyn outside the United Nations High Commissioner for Refugees (UNHCR) building.

They have set up makeshift shelters at the entrance to the building and have been staying there since last week Monday, 9 May.

FAMILIES CAMP OUTSIDE THE UNHCR BUILDING

Last week about 108 refugees and asylum seekers, left the Lindela Repatriation Centre to camp in front of the UNHRC building.

Ward councillor Jarad Frimmel said since this weekend some of the people have voluntarily been taken back to Lindela Repatriation Centre to be repatriated, and some have chosen to be reintegrated back into the communities where they came from.

“As of Monday, 17 May, about 60 people remain and are still occupying the sidewalk. The group mainly consists of the people who were taken away to the Lindela Repatriation Centre in 2019 following the successful court order brought by the Waterkloof Home Owners Association and the Brooklyn and Eastern Suburbs Association (BEACA).

“Additional refugees and asylum seekers who were not part of this group in 2019 have also joined.”

He said the group consists of families and mostly children, some from the Democratic Republic of Congo.

A meeting between the UNHCR, members from Brooklyn SAPS, SAPS diplomatic policing unit, SAPS public order policing, TMPD, the DHA, UNICEF, and a state prosecutor took place on Friday, 13 May.

“During the meeting, several questions were raised regarding the 2019 high court order brought by the Waterkloof Home Owners Association and the Brooklyn and Eastern Suburbs Association (BEACA).

These questions have been sent for review to the City of Tshwane legal section as well as the Department of Home Affairs for feedback.”

The DHA has committed itself to provide transport for any refugees and asylum seekers who want to return to the Lindela Repatriation Centre.

The remaining group of refugees and asylum seekers have been placed on terms and a written instruction was issued by the TMPD by-law unit.

This instruction warned the group to vacate the premises in three days because they are contravening the National Building Regulations and Standards Act; the Gauteng noise regulations, and the National Road Traffic Act.

The instruction also said the group is also contravening various health regulations by erecting structures and allowing kids to play in the streets, creating danger and obstructions for pedestrians and motor vehicles, etc.

“The written instruction was given to the group and a repeated verbal warning again on Friday. They were given another three days to move from the sidewalk, and the days were Saturday, Sunday and Monday.

“Monday was the last day that the group may remain on the sidewalk as per the written instruction given to them, but they have not adhered to that.

It is believed that over the weekend the remaining group did not agree to move to Lindela even though they were counselled by social workers.

Frimmel explained that the people went so far as to threaten the UNHCR and NPO social workers with violence, which led them to withdraw from the group.

“The group keep tripping the electrical fence and study the walls/ fence between 23:00 and 00:00 to find weak points in the system.”

“The UNHCR received a letter from the group that threatened them that they will violently enter their premises if their situation is not resolved.”

The group wants the UNHCR to offer them assistance in being repatriated to other countries because of fear of xenophobia in South Africa.

ORGANISATIONS COME UP WITH RESOLUTIONS TO THE PROBLEM

Frimmel indicated that the City of Tshwane is in consultation with its legal services and is prepared to apply for a court order for any remaining members of the group should they not adhere to the instruction.

He said TMPD is ready to take further action as required by law after drafting an operational plan between all the relevant Law Enforcement Departments.

The Department of Home Affairs has committed to providing transport for any refugees and asylum seekers back to the Lindela Repatriation Centre.

They are also willing to assess and advise on matters such as repatriation, integration into the community and applying for refugee status, etc.