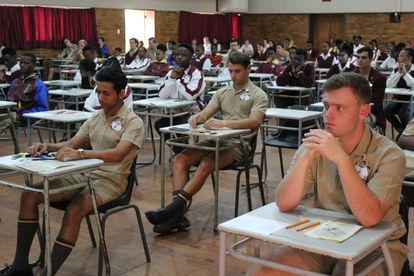 Limpopo Education MEC Mavhungu Lerule-Ramakhanya has expressed confidence over the current batch of 2022 matric learners in the province.

This comes after the MEC’s visit to Louis Trichardt High School in Vhembe district on Monday, the first day of the 2022 final matric examinations, where she monitored the learners after her address.

Lerule-Ramakhanya is confident that the learners will perform well this year, saying that the province has done all it could to prepare the learners for final matric examinations.

The MEC further expressed that the current cohort of matric learners in the province have the potential to change the perception about Limpopo.

“The current cohort of matric candidates have a potential to change the perception about the Province perfomance,” read a media statement released on Monday by the education department.

Limpopo is known for its poor matric results performance. In 2021, the province took a nosedive and occupied the ninth spot in the country with a pass rate of 66.7%, under the leadership of former MEC of Education, Polly Boshielo.

The Department of Education in Limpopo, led by MEC Mavhungu Lerule-Ramakhanya, has had several interventions this year to assist the class of 2022 matric learners catch up on the curriculum and prepare for the final matric exams. Amongst the interventions the department undertook, was the introduction of extra matric camps during the winter school holidays with more camps in Sekhukhune — a poor performing region with low matric pass rate in the entire province.

Lerule-Ramakhanya said the intervention strategies employed since early this year will go a long way in changing the narrative and said it is up to the class of 2022 learners to rewrite their narrative.

“I want to say to all my learners in the province from Grade R to 12, good luck with your exams. We want the narrative of Limpopo to change through you,”

Limpopo has over 140 000 learners enrolled for Matric examination this year. Over 1 700 examination centres adminstered the first paper on Monday. The MEC has called on parents, guardians and all relevant stakeholders to rally behind learners from all grades during this exam period.