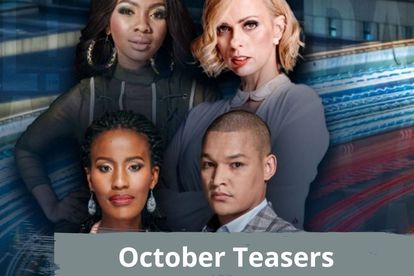 This month in Scandal things are intense, don’t miss out on these Scandal Soapie Teasers provided by TVSA.

ALSO: Get up to R2,000 as a Casino Games Bonus when you make your first deposit!

Coming up on Scandal! this October 2022:

Devastated by what he hears, a man’s actions surprise everyone involved. Ndumiso gets into bed with the devil he knows. A couple clear up a misunderstanding and embrace a new gift in their lives.

Mbali loses it and lashes out in a big way. Heavily laden Ndumiso decides it’s time for a proper confrontation. Nhlamulo is mysterious about a booking he makes.

A hit is taken out on an innocent man. Jakes gets the shock of his life and is unable to defend himself. A family celebrates some good news.

Jakes has an axe to grind with Uthuli, while Jojo seems conflicted by someone’s kindness. A man is given a loaded gun and clear orders, but will he fire? Mary appoints herself in an important role.

A woman is devastated when the man of her dreams chooses someone else. The truth about a policeman’s dirty work comes to light. Mary continues to feel left out of Lindiwe’s life.

A drunk tongue runs loose and makes vicious threats. Absent love makes a man’s heart grow fonder and weaker. A baby mama is upset that her old flame hasn’t kept her up to speed.

Two sisters are spinning out of control, each in their own way. Tlhogi gets disgruntled by an incident at the club. Lindiwe and Nhlamulo are deaf to Zinzile’s warnings.

A villain, stoked by the one he loves, gives a clear instruction that could have ripple effects on a lot of people. Dudu warns Jojo to take legal action to prevent a loss. A couple makes a big decision for the good of their family.

A mother gives a stern warning trying to shock her daughter back to reality. Taps lies to one friend to help another. A big reveal has a couple delighted.

Winnie sees another side to Jojo and Mbali’s determination will not be cooled. Taps is surprised by what Nhlamulo presents him with. Nhlamulo finds himself having to undo an expensive mistake.

Tlhogi is surprised by an unwelcomed guest, and finally reveals her true feelings. A father goes all out to secure his son’s future with him. Vuvu is ready to fight but her opponent won’t be easily bullied.

A wild eruption breaks loose in the Kubeka house as someone’s grip on reality starts to slip. Mdala’s mission starts to shift as he sees himself in a different light. Love is in the air for Mamas and Nhlaks, but Vuvu doesn’t share the sentiments.

Jojo finds an unhinged uninvited guest in his house and is forced to extreme measures to protect his family. The desperate Mdala hatches a brilliant plan to achieve his mission. Nhlamulo uses pampering to dilute Lindi’s growing complaints.

After a wife’s desperate actions, an intervention is needed. A couple goes down memory lane in order to save their future. Boredom pushes Lindi to act erratically.

Petunia is shocked that Mbali does not seemed fazed by a restraint. Mdala’s relative comes into our world with a no-nonsense attitude and makes Tlhogi’s life hell. Lindiwe’s behaviour is triggering for Vuvu.

Blood is not thicker than water when a sibling signs on the dotted line. An old friend opens their wallet to help but worries they might be opening a can of worms. Lindi believes Nhlamulo’s stressing about nothing.

Jojo is stunned by a seduction attempt by one of the Hlatswayo sisters. Taps starts asking questions which make Tlhogi nervous. Vuvu sees Mary’s insecurity and takes the gap to promote herself.

Jojo has to set firm boundaries as a woman deals with the aftermath of her actions. Bra Jakes is ready to go back to where he is not welcome. Lindiwe and Nhlamulo are faced with a terrifying situation.

As devastating news spreads, a man is strongly implored by a relative to bury the hatchet. Hlengiwe receives news that signals a very good thing may be coming to an end. Duduzile receives a life-changing offer.

Nhlamulo and Lindiwe grapple with a life changing decision. The reality that Hlengiwe has been avoiding regarding her relationship with Nyasha finally comes to light. Dudu finds herself stuck between her career and the people she loves.

A heart-warming photo-shoot has surprising results. An art tutor, talented with children, is introduced to Khanyi. Dintle is worried about losing a friend to love.

Scandal! airs on e.tv Mondays to Fridays at 19h30.