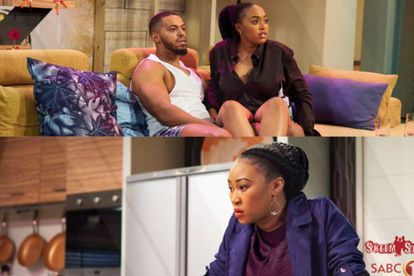 Skeem Saam’s fan-favourite couple Lehasa (Cedric Fourie) and Pretty will fight to stay together from the end of June throughout July, even after Khwezi discovered on Friday (24 June) that she’s pregnant with his baby.

The Skeem Saam TVSA June and July teasers indicate that Lehasa will be determined to stay with Pretty, the woman he truly loves despite finding out that Khwezi is carrying his baby.

We know that Pretty will be forced to go back when she gets released from jail and that her family will kick her out when they find out she’s back together with Lehasa.

Team #PreHasa should know that this is just the beginning of what’s to come as Khwezi is going to play dirty to prove to him that they belong together.

But her actions will only drive him into Pretty’s arms because Pretty reminds Lehasa of his late wife who died from cancer.

He might attract women who are villains like him but he wants a gentle and loving wife when he gets home… Pretty is Lehasa’s home!

Lehasa realised he doesn’t want to marry Khwezi out of obligation to keep her close and quiet because she knows his secrets…secrets that could land him in prison.

She knows that he killed Fanie, stole business ideas from Sonti, kidnapped people, and etc.

The only way Lehasa can be free from Khwezi, is if he kills her, just like her friends from the hospital.

Pretty might not be able to handle the truth once she finds out she’s in love with a monster.

It appears, the only person who can end #PreHasa this season is Pretty because he’s got way too much to lose and knows she deserves better than him.

Mantuli and Meikie will reunite this month when Pretty shacks up the Maputlas and when she refuses to see her family on Tuesday, 28 June.

“Lehasa finds his tongue and requests to see the woman he loves.”

Khwezi will get arrested on Tuesday 12 July when she shares Pretty’s confession which will make Peterson realise that she kidnapped Pretty last year when she went missing.

“Pretty makes a choice that shocks her family.”