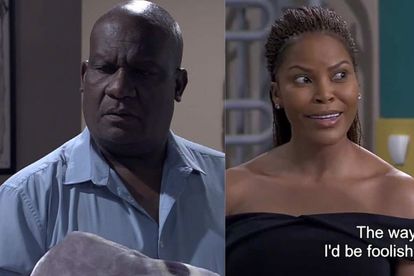 ‘Skeem Saam’s’ John already wants to move on with Melita after Meikie got sentenced to prison earlier this month. Image via Facebook @SkeemSaam

‘Skeem Saam’s’ John already wants to move on with Melita after Meikie got sentenced to prison earlier this month. Image via Facebook @SkeemSaam

Fans are disappointed in him because his cheating scandals are the reason Meikie is behind bars today.

Skeem Saam’s John is a serial cheater and he’ll cheat on Meikie again with Melita.

He’s proving that a leopard will never change its spots and that Meikie deserves better than him.

Melita was offered a job at The Maputla Supermarket last night and came over to his house to get the contract.

#SkeemSaam on Twitter are hoping for John and Melita to have an affair because they want to see John happy again.

He’s been lonely in his big house without his wife, his sons, Tbose (Cornet Mamabolo) and Leeto (Eric Macheru).

WHY MEIKIE WAS SENTENCED TO PRISON

John has been cheating on Meikie for years with several women from Charity Ramabu, Mantuli, to Mary Matloga and will cheat with Melita.

Everyone in Turfloop knows that he has a wandering eye and he’s a serial cheater who will never change.

Meikie attempted to end Mantuli’s life when she found out that they had an affair and conceived Kwaito.

She shot and injured both Mantuli and Kwaito (Clement Maosa) and was sentenced to 15 years in prison.

He almost ended his marriage when he had an affair with Charity Ramabu (Mokgofe Moagi) but changed his mind.

Melita (Hellen Motsuki) will not turn down John if he makes a move on her because she’s a gold digger and a hustler.

She will see her affair with him as another opportunity to make money and climb the corporate ladder.

Melita wouldn’t have had the guts to have an affair with John if Meikie was not in prison.

She will also have an affair with him because she might be scared of losing her new job.