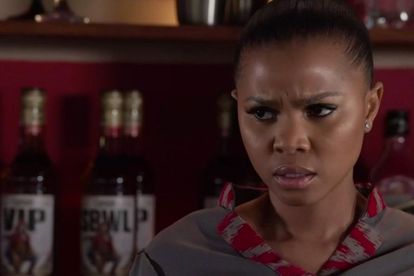 Popular actress and child star, Khanya Mkangisa, who is famously known for her roles in Muvhango and Isidingo recently discussed her return to The Queen and venturing into music.

Mkangisa returned to The Queen last month (October) after reportedly getting fired for allegedly driving under the influence of alcohol in 2019.

The actress, who’s starred in some of the country’s biggest TV shows recently sat down with Drum Magazine to chat about her return to the Mzansi Magic telenovela, her character’s storyline and venturing into music as a DJ.

She plays the role of Detective Vuyiswa Maake’s (Zandile Msutwana) niece, Akhona, who dated bad boy, Kagiso Khoza (Loyiso McDonald) for a long-time on The Queen.

The 33-year-old actress tells the publication that her love for acting began when she was still on YoTV.

“I started interviewing actresses which made me want to be one.”

“I decided to get an agent and an acting coach, and I booked my first acting job in matric on a show called The Lab.”

She says that viewers are about to see a different side of her character, Akhona, who’s never been lucky in love.

‘“Akhona is self-aware and very independent and doesn’t have luck when it comes to men.”

“The new storyline is really going to surprise them.”

“We will have a new face on the show Lebo Msiza, who will play Clive, but it is all I can say for now.”

“Lebo is amazing to work with and our viewers can expect to be blown away.”

Mkangisa who is also a model and a DJ says music is something she’s always been interested in but was was a bit reserved about.

“It’s so liberating. When I started deejaying I wondered why I didn’t start it sooner.”

“I love music but I can’t sing so I thought that being a deejay is the closest thing.”

“It’s a lot of fun but it’s also challenging.”

She starred in shows such as, Forced Loves seasons one and two as Nonhle Minola, Harvest season one as Tshepiso,  SABC 3’s canned soapies; High Rollers season two as Bonnie, and Isidingo as Aphiwe Nzimande.

Mkangisa has also appeared on SABC 2’s Venda soapie, Muvhango, as Mbali and Mzansi Magic’s Sunday night drama, Rockville, where she played the role of Nolitha.