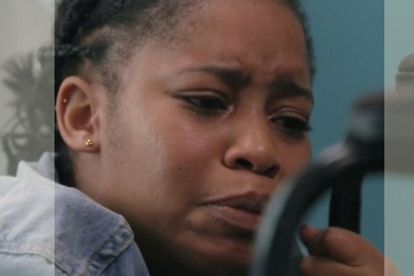 ‘Gomora’ actress, Siphesihle Ndaba in her role as Mazet struggling to get into her wheelchair. Image via Twitter @Jongalist

‘Gomora’ actress, Siphesihle Ndaba in her role as Mazet struggling to get into her wheelchair. Image via Twitter @Jongalist

Mazet got shot a few weeks ago (17 November) by Don (Israel Matseke-Zulu) and was told that she won’t be able to walk again.

GOMORA’S MAZET PAYS FOR HER CRIMES

Mazet is struggling to adjust to her new reality and she’s punishing everyone because she doesn’t want to be taken care of.

Ndaba’s character struggles with communication and doesn’t want to talk to anyone about her challenges.

She’s pushing her boyfriend, Ntokozo (Ntobeko Shishi) away and hiding her condition from him because she doesn’t want pity.

Mazet has always been a loner, independent because she’s never had family and was raised by the streets.

This new chapter is teaching her to re-evaluate her life as her mentor, MamSonto suggested.

MamSonto (Connie Chiume) wanted her to go back to school, and leave the criminal life behind because she wanted better for her.

The shooting is a blessing in disguise for Mazet because she will come out stronger and re-think her life choices.

Some viewers think that the shooting is Mazet’s karma because she is a hijacker who’s shot and killed a lot of people.

Her die-hard fans are hoping that she will soon recover from the wheelchair because they prefer her old version.

REACTIONS FROM MAZET’S FANS ON ‘GOMORA’

“It will get better with time Mazet, I can relate sis.”

“I know is just a storyline, but it hurts to see Mazet like this.”

“Mazet is killing the wheelchair role.”

“As much as I feel sorry for Mazet but leyena she used to hurt people by hijacking them akere so I guess it’s karma aii.”

“Yoh! I hope MaZet recovers. I can’t take this.”