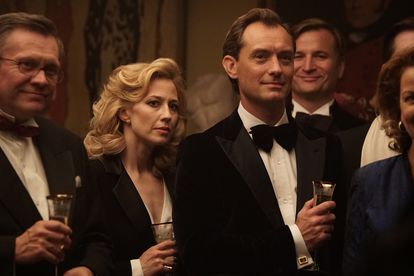 From 2021 Oscar winners Minari and Tenet and 2020 Oscar winner Judy, Jude Law in The Nest; and Janelle Monáe in Antebellum, here are the eight best movies coming to Showmax this September.

Winner of over 100 awards, Minari is a moving semi-autobiographical drama about a family of South Korean immigrants who try to start a farm in rural Arkansas in the 1980s.

Minari has a 98% critics rating on Rotten Tomatoes, with Empire Magazine calling it, “A profound, detail-perfect and soulful slice of American family life, with some of the year’s most sincere performances to date” and Los Angeles Times saying, “Minari in its entirety feels like a balm right now, a gentle, truthful and tender story of family filled with kind people trying to love one another the best they can.”

The fifth biggest box office hit globally of 2020, Tenet won the 2021 Oscar and BAFTA for Best Achievement in Visual Effects, with a further Oscar nomination for Production Design.

Directed by five-time Oscar nominee Christopher Nolan (Inception, The Dark Knight Trilogy), the sci-fi action thriller follows Protagonist. Armed with only one word: “Tenet”, he journeys through a twilight world of international espionage on a mission that will unfold in something beyond real time. Not time travel: inversion…

Renée Zellweger (Bridget Jones’s Diary) won a 2020 Oscar, a Golden Globe and a BAFTA for her stellar performance as Judy Garland in the biographical drama Judy. Adapted from the Olivier- and Tony-nominated West End and Broadway play End of the Rainbow, the film was also nominated for an Oscar for the makeup and hairstyling that transformed Zellweger into the late silver screen legend still best remembered for her roles in The Wizard of Oz and A Star is Born. Incorporating flashbacks to Garland’s teenage years, the story traces the final year of the actress’s life as she arrives in London in the winter of 1968 to perform a series of sold-out concerts.

Judy has an 82% critics rating on Rotten Tomatoes, with Rolling Stone saying, “Renée Zellweger performs miracles playing Judy Garland: singing her heart out, baring her bruised soul and acting with a ferocity that ultimately rises to a state of grace.”

Oscar nominee Jude Law (The Young Pope) and Emmy nominee Carrie Coon (The Post, Gone Girl) star in the psychological drama The Nest, which sees a successful entrepreneur’s idyllic life begin to unravel after he moves his American family to a grand old English country manor.

The Nest has an 89% critics rating on Rotten Tomatoes, with IndieWire saying “Carrie Coon delivers one of her most riveting performances to date” and Guardian praising “Jude Law at his best”.

The Oscar-nominated 1995 blockbuster psychological crime thriller Seven is still ranked at #20 on IMDb’s list of Top Rated Movies of all time, with an 8.6/10 rating there and an 82% critics rating on Rotten Tomatoes, where the critics consensus calls it, “A brutal, relentlessly grimy shocker with taut performances, slick gore effects, and a haunting finale.”

Scooby-Doo and the gang are back in the animated adventure comedy, Scoob!, where they must face their most challenging mystery ever: a plot to unleash the ghost dog Cerberus upon the world. As they race to stop this dogpocalypse, the gang discovers that Scooby has an epic destiny greater than anyone imagined.

Nominated for a 2021 Image Award for Outstanding Animated Motion Picture, this box office hit is recommended for ages 7+ by Common Sense Media.

THE SECRET GARDEN | Stream from 6 September 2021

The enchanting fantasy adventure The Secret Garden follows Mary Lennox, an orphaned girl who is sent to live at her strict uncle’s estate, only to discover it conceals a magical garden.

This newest adaptation of the beloved 1911 classic children’s novel by Frances Hodgson Burnett is led by newcomer Dixie Egerickx as Mary, with Oscar nominee Dame Julie Walters as Mrs Medlock, Edan Hayhurst (The Midnight Sky) as Colin Craven and Emmy nominee Amir Wilson (His Dark Materials, The Letter for the King) as Dickon. Oscar winner Colin Firth (Mary Poppins Returns, The King’s Speech, Bridget Jones’s Diary) plays Lord Archibald Craven, returning to the tale 34 years after he played the adult Colin in the 1987 TV movie of the same name.

BUT WAIT, THERE’S MORE…THE LORD OF THE RINGS AND THE HOBBIT BOX SETS | Stream on Hobbit Day on 22 September 2021

22 September 2021 is Hobbit Day, when we celebrate Bilbo and Frodo Baggins’ birthdays and, of course, undertake an epic 17-hour quest to binge all three of Oscar-winning director Peter Jackson’s Hobbit movies and The Lord of the Rings trilogy on Showmax. If you start at 7:00, you can be done by midnight, with five minutes to spare.

The ultimate epic fantasy binge, all three films in The Lord of the Rings trilogy are in the top twenty on IMDb’s Top Rated Movies of all time. The first film, The Fellowship of the Ring, is at #10. The Two Towers is #14, and the concluding chapter, The Return of the King, is at #7. The trilogy won 17 Oscars, grossed almost $3billion worldwide, and is still considered one of the most influential film series ever produced.

Set in the fictional world of Middle-earth and based on the classic, bestselling novel by Bloemfontein-born JRR Tolkien, The Lord of the Rings follows hobbit Frodo Baggins (Critics’ Choice winner Elijah Wood) as he and the Fellowship undertake a dangerous quest to destroy the One Ring and ensure the downfall of its maker, the Dark Lord Sauron (Bram Stoker Awards Lifetime Achievement winner Christopher Lee).

The prequel trilogy – The Hobbit: An Unexpected Journey, The Desolation of Smaug, and The Battle of the Five Armies – follows Bilbo Baggins (Emmy winner Martin Freeman) on his quest to the Lonely Mountain to confront the dragon Smaug (voiced by Oscar nominee Benedict Cumberbatch).

In the late 90s, Carrie Bradshaw and her besties Samantha, Charlotte and Miranda took New York by storm in TV’s most stylish series, Sex and the City, which racked up Emmys and Golden Globes among its many awa’rds. (Binge it all on Showmax.) With production on the sequel series on the go, this is the perfect time to indulge in catch-up with Sarah Jessica Parker, Kim Cattrall, Kristin Davis, Cynthia Nixon and the all-star cast in Sex and the City: The Movie and Sex and the City 2.

Inspired by true events, Foster Boy tells the story of Jamal, a young man imprisoned after years of abuse in the foster care system, and the lawyer who must help him seek justice.