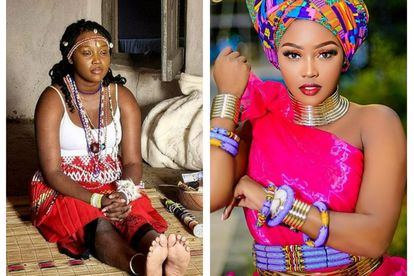 Actress Nelisiwe Sibiya has revealed that life may be imitating art with her storyline on e.tv’s medical drama Durban Gen.

On the drama, her character Mbali Mthethwa has become a sangoma after undergoing training for a few months. Viewers are currently seeing how western and traditional medicine overlap.

‘MY MOM WAS A SANGOMA’ – NELISIWE SAYS

In an Instagram post earlier this month, Nelisiwe revealed that her mother had chosen to answer her ancestral calling when she was younger. He mother left the calling and started being a staunch Christian until she passed on.

Nelisiwe says she is now paying the price although she is still deciding if she should heed the ancestors’ call or not.

Daily Sun reports that the 30-year-old recently had to leave set and go home to rest because she was not feeling well as she had an unpaid debt to the ancestors.

“I really enjoyed this storyline because it reminded me of the reality I face. I also became emotional, drained and exhausted but I enjoyed it a lot. It touches me personally and opens my eyes in many ways,” she said.

Fans and viewers of Durban Gen have since shared how they relate to the sangoma storyline and how much this is true for them.

Loosely translated, “Atleast your mother chose Christianity, unlike mine, who burnt everything associated with the calling including the hut she practiced in. I am now left with the burden of the calling and forced to sort it out as I don’t want it to become a curse that manifests itself through my kids once I leave world”.

Most viewers have applauded Nelisiwe for executing such an important role and allowing herself to portray the storyline with such grace.

ALSO READ: ‘My virginity is none of your business’: Actress Nelisiwe Sibiya

Daily Lotto | No winner of Thursday’s jackpot: All the numbers and payouts