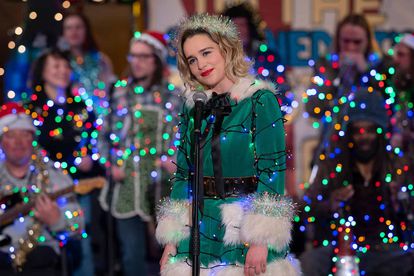 It’s beginning to look a lot like Christmas on DStv. From lekker local Christmas productions to international and lifetime specials, there’s something for everyone this season!

The week before Christmas sees family at the heart of local movie Home Affairs: A Christmas Tale. Sing along to musical special Britain’s Got Talent Christmas 2020, which is set to feature the best acts of 2020 – this festive treat will be jam-packed with festive cheer. For some more musical treats, you can watch Last Christmas, centred around Katarina, a Yugoslavian ‘elf’, who has all but given up on life until she meets someone who helps her in more ways than one. Throw in some classic Christmas tunes courtesy of George Michael and this heartwarming adaptation of the song by the same name is sure to be a festive treat.

Christmas week is all about family on DStv. On Christmas day, tune in for the local movie A Christmas Chorus, where a group of out-of-work friends come together to save Christmas from the coronavirus. Boxing Day will also showcase another local treat, A Twisted Christmas,starring Still Breathing lead Kate Liquorish who plays a wealthy matriarch put under financial pressure during what is supposed to be the jolliest season of all. With no one else to turn to, the wealthy family are forced to accept an invitation to stay with their muslim gardener and his family and fight to overcome their cultural differences. The Christmas week also sees highly anticipated Machunsa 2 come to our screens, Lifetime movie Christmas Hotel and an entire Christmas Marathon for the kids.

The fun doesn’t stop after Christmas though. From the international film Late Night to the first season of local drama Mnakethu Happily Ever After?, there’s a lot to get excited for in 2021!

Here’s just a glimpse of what you can expect while we’re inching towards 2021 – only on DStv:

Hilton Pelser, David Viviers and BrontÃ© Snell star in this hilarious family film. The festive season is all about love and family, but a feud threatens to pull a family apart while they are living in the same house. Will they survive or will a loud troublemaker end up ruining it for the entire clan before the table is set? Watch the Williams as they gear up for a Christmas they will surely never forget.

As Simon Cowell is still recovering from his recent back injury, the panel of judges for this special will be made up of Amanda Holden, Alesha Dixon, David Walliams and Ashley Banjo. Hosted by musical duo Ant & Dec, this special will be jam-packed with Christmas cheer and feature some of the best acts over the span of the series. Marketed as a celebration of the show and not a competition, you can bet there will be performances we will only get to experience once-off.

As the world-famous song sung by Wham! goes – “Last Christmas, I gave you my heart but the very next day, you gave it away. This year, to save me from tears, I’ll give it to someone special” – so too does this movie. Katarina works as a helper elf in a Christmas store but isn’t very happy with her life until she meets someone who changes her perspective on being given a second chance to live. Homeless and ready to give up on life, Katarina has to move back in with her Yugoslavian immigrant parents – an overbearing depressed mother and former-lawyer father. This romantic comedy is definitely a must-see and features a star-studded cast including Game of Thrones alumnus Emilia Clarke and Crazy Rich Asians’star Henry Golding.

Directed by Martin Koboekae, this local movie sees a young man finding a girlfriend but is in for a harsh reality when he assumes his life will be cosy. The young man encounters the angry spirit of a dead man who was transported home for burial. Take Me Home Again stars Six Nyamane and Pholani Madondo.

Rosario Dawson, Thomas Middleditch and James Marsden star in this Canadian animated movie. Hank – a fallen henchman – assembles a team called the ‘Union of Evil’, which consists of Lester and two other new members. Together, the union must prevent Baron Blackout from taking over the world using their assigned lair, the Vault of Villainy, to their advantage.

2020 has indeed been a rough year, especially for the friends within this local flick. Bianca Flanders, Namisa Mdlalose and Dean Balie star in this lovable Christmas film which sees a group of out-of-work performers on a mission to save Christmas from the coronavirus.

When a wealthy family loses everything just before Christmas, the only person willing to take them in is their long-time Muslim gardener and his family. Even though the adjustment is a bit tricky at the beginning, there are plenty of reasons to be merry as everyone celebrates together and learns the meaning of real family.

The Royal Variety Charity has been staged since 1912, which makes it one of the most successful and longest-running entertainment shows in the world. This year’s gala evening will be hosted by actor and singer Jason Manford and there’s no doubt it will be attended by some of the senior members of the British Royal Family.Expect performers such as Captain Sir Thomas Moore and entertainer Michael Ball, as well as a special appearance by Gary Barlow.

Durban filmmaker Siyabonga Shibe has made a highly fan-requested sequel to his heartwarming comedy Machansa. The story follows a successful middle-class businessman with a severe gambling problem who makes a bet with his former business partner that sees him end up living on the streets. To regain control of his company and get back to the comfortable life he once knew, Machansa must survive without gambling for a year.

Tatyana Ali and Sean Patrick Thomas star in this Lifetime classic. When big-city hotelier, Erin Roberts, must return to her hometown to restructure the Inn she used to work at, the townspeople will do anything to stop her from doing what she was sent home to do.

Spend Christmas with cadets-in-training at Top Wing Academy. Best friends Penny, Rod and Brody celebrate a special white Christmas but things go awry when Santa crashes his sleigh while on his way to drop the cadets’ presents. To make matters worse, Penny’s little brother also finds himself in a bit of a bind. Who else other than the cadets can save them both?

Robert Downey Jr, Tom Holland and Rami Malek star in this 2020 remake of the classic tale of a vet who can speak to animals. In this version, Dr John Dolittle retreats to solitude after his wife dies. Destined to hide behind the tall wall of his manor, the fast-talking doc is forced to emerge when the Queen becomes ill and needs a cure that can only be found on a mythical island.

Mnakethu Happily Ever After? S1

From slay queen to sangoma, Samantha’s life has changed dramatically. Dulas is caught by MaDlamini in an extremely compromising position and Bheki Cele is finding that being engaged in a polygamous union is not all it’s cracked up to be.

This new lifestyle and health show is presented by singer Leah. This show will centre around interesting subjects such as self-care and fitness and will play host to doctors, pharmacists, therapists and specialists from across Mzansi.

Starring Emma Thompson and Mindy Kaling, Late Night is all about workplace diversity. Katherine Newbury is the host of a famous talk show but her ratings are dropping faster than the Kardashians babies, so her plan is to hire the first female staff writer. However, her plan is thrown into disarray.